NBC's 'Connecting...' Tries To Make Sense Of World In Quarantine 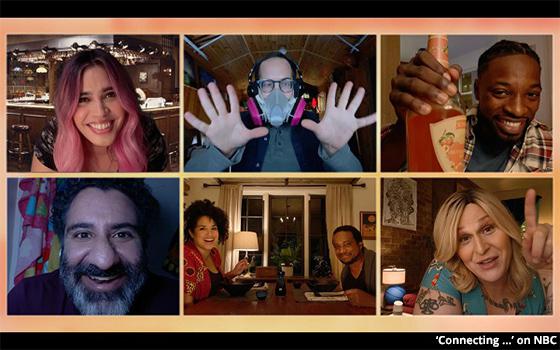 Talking is not necessarily synonymous with connecting, but in a world of isolation in which electronic means are available for communicating with each other from our lockdown locations, what more can we do?

A new series premiering Thursday on NBC attempts to both reflect and define this aspect of our new lives in the era of COVID-19.

Called “Connecting …” (yes, the three-dot ellipsis is part of its official title), this show is little more than a Zoom conference in which a group of homebound friends try to stay connected with each other.

As most of us know by now, Zoom conferences in and of themselves are not exactly action-packed events.

Thus, like the Zoom conferences many of us have been involved in during these many months, the conference on view in “Connecting …” (not identified specifically by the brand name “Zoom,” by the way) depends almost entirely on the quality of the conversation to hold our attention.

In addition to that, the visual frames in which we see the participants also play a part in the show, but to a lesser extent than the dialogue.

The background that draws the most attention in the half-hour premiere episode of “Connecting …” is the image of the bar from “Cheers” that has been chosen by the conference participant named Annie (Otmara Marrero, seen upper left in the above photo).

This serves as a conversation starter for Annie and her friend Ben (Preacher Lawson, upper right). They are the first of this videoconference’s participants to show up.

This conversation, in which these two actors pretend to argue good-naturedly about various “Cheers” characters, comes across as stilted and contrived.

It serves as an illustration of the pitfalls of producing a scripted series in which the quality of the written word is of paramount importance.

However, to give the writers of “Connecting …” their due, they give this assignment a good college try.

In the 21-minute premiere, the dialogue runs the gamut from forced and mundane to touching and even heartbreaking. Touching all of these bases, even the negative ones (such as “forced” and “mundane”), is no mean feat.

But does it rise to the level of entertainment? The answer from here is no.

On the other hand, if “Connecting …” is remembered at all after its (presumably) brief time upon the TV stage, it will be remembered as one of the many TV ideas that came and went as our national media (in this case, television) tried to harness and make sense of the new way of life in this unprecedented and lengthy pandemic.

“Connecting …” is certainly a product of its time. As such, it can only last as long as these times do. If and when this pandemic ever ends, this show will be seen as yet another dusty relic of its era.

covid-19, television
1 comment about "NBC's 'Connecting...' Tries To Make Sense Of World In Quarantine".
Check to receive email when comments are posted.
Next story loading