'Name Your Car Day' Shows Vehicles Are Not Like Other Purchases 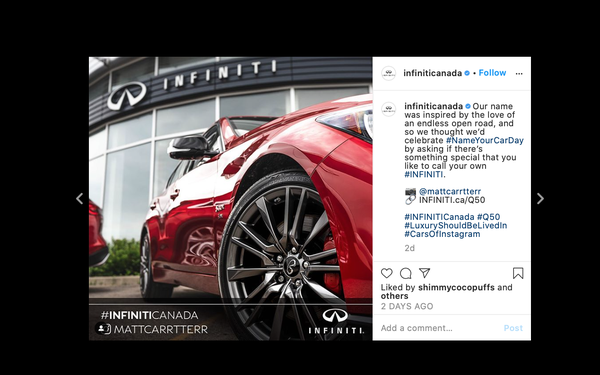 I’m sorry to inform you that you missed it. Friday (Oct. 2) was Name Your Car Day.

But it’s not too late to celebrate. In fact, you can celebrate every time you get behind the wheel and fondly call out the name of your trusty four-wheeled friend.

How many other objects inspire names? Have you ever heard of anyone naming their refrigerator or furnace -- or even their house?  These are all major purchases, but obviously don’t inspire the kind of emotional reaction that our vehicles do.

Twenty-five percent of people have a name for their car, and the most popular name given is Baby, according to checkiday.com. My SUV is named Sparty because it is green and I went to Michigan State University. Kind of obvious.

You might remember Herbie the Love Bug, Lightning McQueen from "Cars," Kit from "Knight Rider," General Lee from "The Dukes of Hazzard," and Bandit from "Smokey and the Bandit." These are just some of the famous car names that are known by millions of people, according to National Day Calendar, which has a vested interest in recognizing all the “Day” celebrations, no matter how inane.

The group suggests you pick out a name for your car if you haven’t already, and use #NameYourCarDay to post on social media. Instagram currently has 3,200+ posts with the hashtag, Facebook has 1,400+, and Twitter has hundreds more.

Brands that recognized the day on their social media accounts include Infiniti, Lexus, Subaru, Nissan, Ford, Lincoln, Hyundai, Porsche and Toyota. Many of the posts were from dealers.

Volkswagen took advantage of the occasion to explain how each of its models got their names. If you were wondering, Phaeton was a god who almost lost control of the chariot.

It’s not just a U.S. thing. Infiniti of Canada, BMW of South Africa, Subaru of Mexico and MG Motor Europe got in on the action.

Mini, which may have the most owners who have named their cars (if all the folks who show up with their four-wheeled darlings to drive in Mini Takes The States are any indication) posted a photo on Facebook of its second-generation Liquid Yellow Mini Cooper, which it is calling Sunny.

Auto-affiliated brands also posted about the day, including Continental Tires and State Farm.

So this begs the question: Can automotive marketers do a better job of tapping into that emotional connection when trying to build loyalty? Clearly, it has to go beyond social media posts that mark a silly holiday.

And what is your vehicle’s name?

automotive, loyalty
1 comment about "'Name Your Car Day' Shows Vehicles Are Not Like Other Purchases".
Check to receive email when comments are posted.
Next story loading