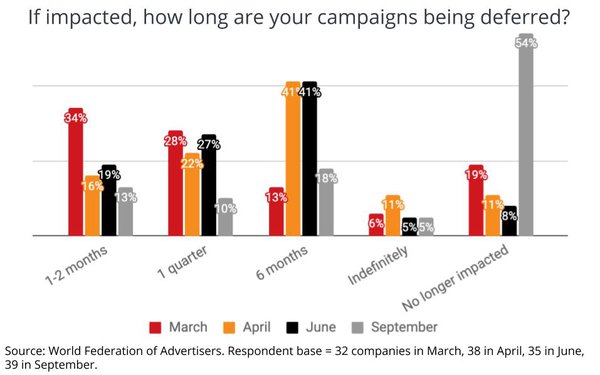 "Guarded optimism" is how analysts at the World Federation of Advertisers characterize responses to the federation's fourth tracking study on the impact the COVID-19 pandemic is having on marketing and media spending plans worldwide.

Significantly, the member companies surveyed have greatly normalized their marketing campaign plans, with more than half now saying they no longer are impacted by the pandemic, while less than a quarter (23%) say they have been deferred 6 months or longer at this point.

While media spending has not seen quite the rebound in normalization, there are pockets of improvement -- especially for digital media, which are now in positive territory, while out-of-home, print, TV, and influencer media spending have all improved from the kinds of cuts they were experiencing earlier this year.

Only events/experiential marketing and radio have deteriorated further.
"We are starting to see some green shoots of recovery with more than half our members no longer holding their campaigns back as a result of the pandemic," WFA CEO Stephan Loerke stated, adding, however that "there is still a lot of uncertainty though and it’s unlikely we’ll be moving to 'business as usual' anytime soon. We are also seeing an acceleration of the shift to digital channels but it remains to be seen if this will be permanent." 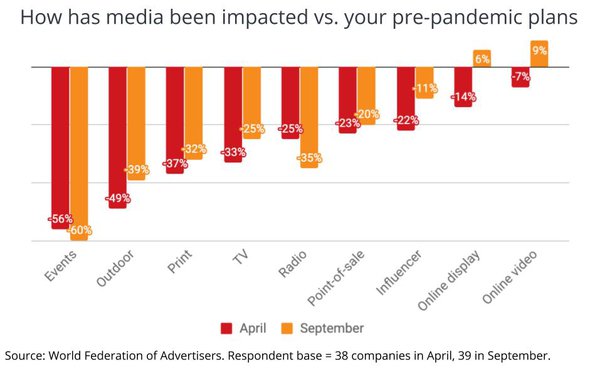