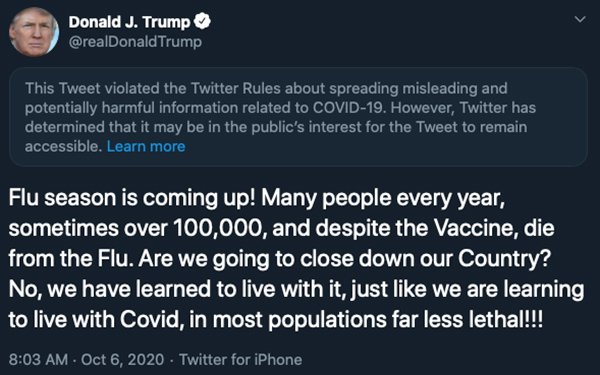 President Trump on Tuesday reiterated his call to abolish web publishers' legal protections, after Facebook and Twitter took action over his misleading post comparing COVID-19 to the flu.

In a tweet posted shortly after noon on Tuesday, Trump wrote “Repeal Section 230!!!” in all capital letters, referring to the law that protects websites from lawsuits over their content moderation policies.

“Many people every year, sometimes over 100,000, and despite the Vaccine, die from the Flu,” Trump wrote in the original post. “Are we going to close down our Country? No, we have learned to live with it, just like we are learning to live with Covid, in most populations far less lethal!!!”

A Facebook spokesperson said: “We remove incorrect information about the severity of COVID-19, and have now removed this post.”

Facebook's written policy on combating incorrect pandemic information calls for removal of “COVID-19 related misinformation that could contribute to imminent physical harm,” including posts “that make false claims about cures, treatments, the availability of essential services or the location and severity of the outbreak.”

Section 230 of the Communications Decency Act shields web publishers from liability for content posted by users. The law also provides that publishers are immune from suit over content moderation decisions, including removing users' posts.

Earlier this year, Trump directed the Commerce Department's National Telecommunications and Information Administration to petition the Federal Communications Commission for new rules that could link those protections to web companies' content curation policies.

The FCC is currently considering that petition, but many legal experts say the agency lacks the authority to issue rules regarding Section 230.