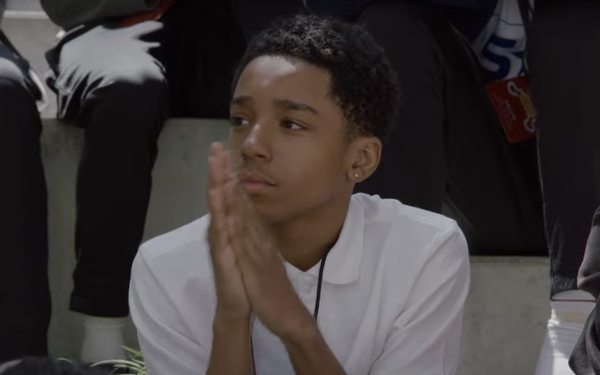 A scene from the "Black Boys' documentary.

Old Spice is teaming up with NFL great and activist Malcolm Jenkins, hoping to boost graduation rates among Black students and teach about racial justice. And while the Procter & Gamble brand typically relies on funny business to promote the men’s grooming line, this effort involves screening “Black Boys,” a documentary executive-produced by Jenkins, to kids in underserved schools around the U.S.

The announcement comes at an awkward time for the Cincinnati, Ohio-based consumer products giant. While it has made gender and racial equality a core part of its marketing messages, shareholder activist group As You Sow is calling for the company to release metrics on its hiring practices.

The film initiative is the first step in a partnership with Never Whisper Justice, which aims to amplify the Frontlines of Justice e-learning curriculum, fostering personal and professional development. And it builds on the racial, educational and social justice themes in the film, directed by Sonia Lowman.

The effort also includes a virtual tour with Jenkins, a two-time Super Bowl winner, and the Tennessee Titans’ Derrick Henry and reigning NFL Man of the Year, the Baltimore Raven’s Calais Campbell. The players will partner with Old Spice, bringing the film to students where they will participate in class discussions about the film’s exploration of “identity, opportunity and equity in America."

The initiative stems from research that confidence is the best predictor of achievement in mathematics and English, and among the best-known predictors of success.

Separately, As You Sow announced that 37% of Procter & Gamble shareholders voted in support of its resolution calling for diversity disclosure. “Investors are asking Procter & Gamble for goals, metrics, and trends related to its promotion, recruitment, and retention of protected classes of employees,” it says. “Shareholders want Procter & Gamble to show that its internal practices match its extensive advertising campaign focused on race relations in America.”

It says P&G spends $7.33 billion annually on advertising, often discussing race. Its award-winning efforts include “The Talk,” about conversations Black parents must have with kids; “The Look,” depicting bias against Black men; “Circumstances,” which details COVID-19 disparities and “The Choice,” which asks how Black Americans should respond to incidents indicating their lives do not matter.

Other companies, including some in the ad world, have taken steps to make diversity figures public. As You Sow says, Gilead, JPMorgan Chase, Mastercard, MetLife, Morgan Stanley, and Oracle have all agreed to more diversity reporting transparency.