Voice Of America: On PBS, The Times Of Walter Winchell 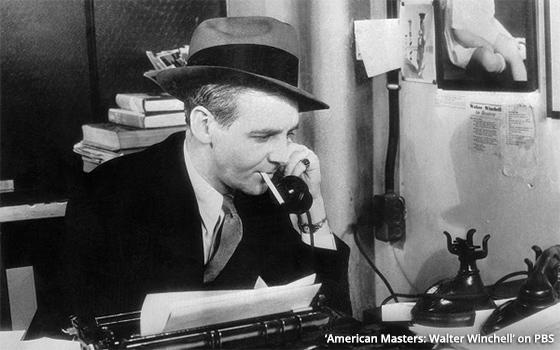 Walter Winchell, the gossip-columnist star of newspapers and radio whose career was derailed in the television era, gets the “American Masters” treatment this week on PBS.

Titled “Walter Winchell: The Power of Gossip,” this new “American Masters” gallops through the life story of Winchell (1897-1972) in just under 53 minutes.

It is a time frame that is inadequate to tell the full story of a man who was once arguably the most famous man in America with the possible exception of the president.

Winchell achieved the pinnacle of power and fame in his productive middle years of the 1930s, ’40s and at least part of the ’50s. But by the time he died, he was little remembered by a world that had long ago passed him by.

Winchell's life was nothing if not complicated. He married young, and in a few years deserted his wife for another woman with whom he had two children but never married.

He then embarked on a career as the most famous journalist in America and rarely saw his family.

Winchell was born and raised in relative poverty in Harlem, and soon gravitated to the vaudeville stage at a young age.

He later found his calling when he began writing a series of self-styled columns about the lives of fellow vaudevillians.

His emergence as a popular newspaper columnist paralleled the rise of a new kind of pictorial tabloid journalism typified by the brash New York Evening Graphic, which gave him his first real job as a columnist.

Winchell eventually rose to become the most-read newspaper writer in America and also one of the nation's most popular radio personalities.

He became rich and made friends in high places (among them, Franklin Roosevelt and J. Edgar Hoover). He also made enemies.

According to this documentary, Winchell in the 1930s was one of the most vocal anti-Hitler commentators in America.

By the 1950s, though, Winchell became a vocal promoter of Senator Joseph McCarthy and his anti-Communist crusade. When McCarthy fell from grace, so did Winchell.

But wait, there's more -- a lot more actually than could evidently fit into this breezy and brief documentary.

Gabler is on hand along with various other commentators (historians of culture and media and the like) to position Walter Winchell in the context of his times.

Despite its brevity, the documentary does a competent job of hitting the high points (and some of the low ones) of Winchell's life.

For those who perhaps have never heard of Winchell, this documentary will serve as a more than adequate introduction.

But beware of sweeping generalizations. Both at the beginning and end of this “American Masters” installment, grand statements are made that position Winchell as the godfather and progenitor of all of the news-media excesses that are with us today -- from supermarket tabloids to the opinionated, partisan “news” of our television networks.

Among other honorifics, the documentary labels Winchell the “architect” of modern media and in his day, the “most powerful” person in the entertainment business.

The documentary, however, does not provide sufficient evidence to support these assertions, which never needed to be made in the first place.

Walter Winchell was a product of his time. He may have advanced the dubious cause of news-media sensationalism, but he did not invent it. It was already there. He just happened to be very, very good at it.

media, news, newspapers, radio, television
1 comment about "Voice Of America: On PBS, The Times Of Walter Winchell".
Check to receive email when comments are posted.
Next story loading