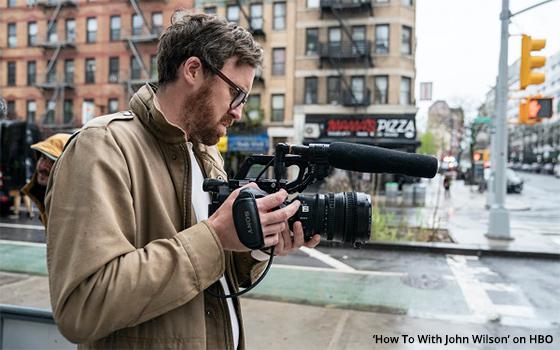 A new show premiering Friday on HBO sweeps onto TV like a gust of fresh air.

The concept of this new show is not complicated. “How To With John Wilson” presents the titular individual, John Wilson, as an everyman with a video camera.

He then shares with us what he sees and observes with it. That is basically it -- except that it is a whole lot more too.

Ninety-nine times out of a hundred, this approach to creating a TV show never works. But John Wilson does more than just film people and situations with his handheld camera.

He somehow goes deeper, under the surface. In his hands, and aided by his own self-styled narration, the interactions and behaviors he captures with his camera somehow become more meaningful than they would seem to be at first glance.

According to the press material for this show, John Wilson (pictured above) first began creating his own videos -- actually short films, each with a “how to” theme -- and posting them for free on the internet.

Two got picked up for film festivals and now he has his own series of short films on HBO -- which is no mean feat.

The show appears to have been made primarily in the streets, sidewalks, plazas and parks of New York City.

In the series premiere, subtitled “How to Make Small Talk,” Wilson examines the minutiae of interpersonal communication between vague acquaintances and total strangers -- a phenomenon that is part of the fabric of life in New York.

His analysis of the way people communicate is meant to be humorous to be sure. But he also reveals illuminating truths about the people he films -- most of whom seem unaware that he is filming them.

Wilson is a keen observer of glances, gestures and other elements of body language. To show us what he means, he has assembled a mind-boggling collection of interactions filmed on the street that he apparently encountered at random.

The most impressive thing about this show is the work that apparently went into finding and filming so many tiny scenes.

In just the first half-hour alone, you get the feeling Wilson must have walked for miles and miles over a period of days and weeks to find the people and situations that made it into the final cut.

The most winning aspect of this show is that, in the final analysis, it is hopeful and optimistic. Wilson himself takes no side either for or against the behaviors he films, but somehow his deadpan approach ennobles nearly every person he comes into contact with.

There is a certain nobility to this show too -- a TV show about everyday lives made by one guy armed with a simple camera and his own powers of observation.