Study Finds Most Will Be Glued To Election Results, But Biden Supporters More Likely To Believe Them 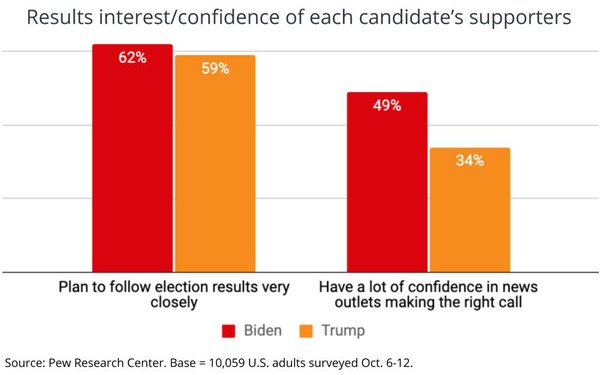 More than half of American voters plan to follow the results of the 2020 election "very closely" on Election Day, but supporters of Democratic challenger Joe Biden are more apt to have confidence in the news media to make the right call on the outcome of the election than those who support the Republican incumbent.

Thats the finding of a new study released today by the Pew Research Center, which also found that the overall interest of Americans in election news is approaching parity with their interest in the COVID-19 pandemic.

"Overall, three-quarters of U.S. adults say they are paying 'very' or 'fairly' close attention to news about the 2020 presidential candidates. That is up from 66% just a month ago and includes 39% who are paying very close attention.

It also brings the share of Americans who are closely following the election roughly in line with the share closely tracking coronavirus news (79%), attention that has remained high since the outbreak hit the U.S. in early March," Pew analysts note in the report, which also found that Biden supporters "are more likely than Trump supporters to say they find it easy to determine what is true and what is not related to the presidential campaign: About six in ten Biden supporters (59%) find it easy to distinguish fact from fiction, while most Trump supporters (62%) find it difficult."

The major national broadcast networks will be the go-to source for news about the results on Election Day among registered voters supporting Biden, vs. cable TV for the incumbent President's supporters. 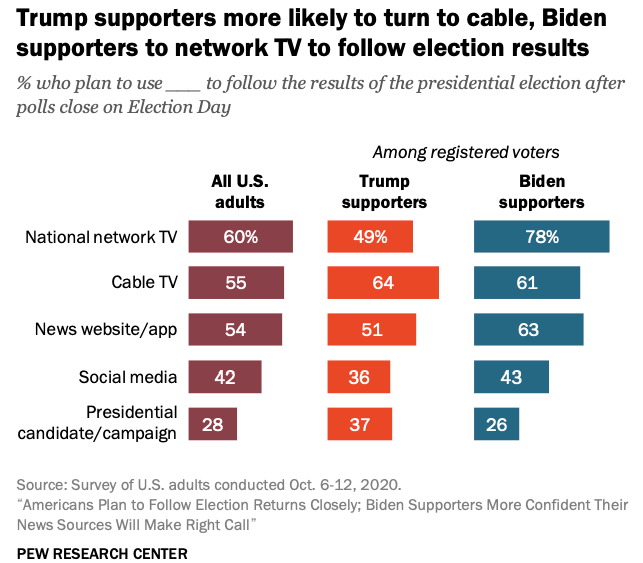