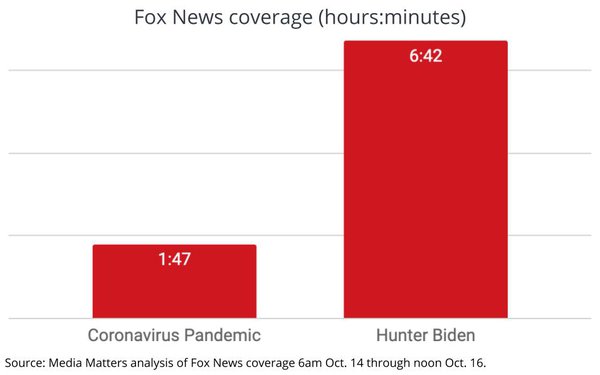 Rupert Murdoch's media empire arguably did more than any other source to help the President get elected in 2016, and it appears to be doing everything it can to help him get reelected.

But unlike the lead-up to 2016, when Murdoch's Fox News and New York Post simply drummed up partisan coverage, this time they're simply promoting the kind of manufactured political hit job that otherwise would have been handled by a certain supermarket tabloid.

Murdoch's media outlets are filling in for The National Enquirer, which is no longer in the President's pocket and therefore no longer manufactures sensational news attacking his political opponents.

That explains why The New York Post "broke" last week's story about the discovery of a laptop computer allegedly belonging to Joe Biden's son Hunter that had incriminating emails stored on it.

As unoriginal as that ginned-up conspiracy might seem (it's virtually the same script used to hit his 2016 opponent Hillary Clinton), if there's anything the President's dirty tricks team knows, it's that if you repeat a manufactured hit job enough, some people will believe it.

Even as the veracity of the Post's story comes under scrutiny, Murdoch's Fox News Channel has devoted a disproportionate amount of coverage to it.

According to a Media Matters analysis in the days after the Post story broke, Fox news aired nearly four times as much coverage to it than it did to what arguably is the most pressing news story for most Americans: the Coronavirus pandemic.

It's hard to see which is the worse Fox News offense -- downplaying the COVID-19 pandemic, or overplaying a dubious political hit job -- but either way it appears Murdoch once again doing the President's bidding.