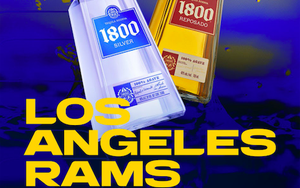 Brands like to cozy up to the NFL, which has an official beer, soda, wine and seemingly everything else under the sun.

Now 1800 Tequila has become the official tequila not of the NFL, but of the Los Angeles Rams, this year in a new stadium with a new team logo.

That’s kind of a natural tie-in since so many Mexican-Americans make Los Angeles their home. But it’s not quite the kind of a tight association that the  Kansas City Chiefs have with 360 Vodka, which is made by McCormick Distilling Co, The company has been based in the city since 1856. The vodka brand this year became the Chiefs’ official vodka.

In Pittsburgh, fans can now sip Terry Bradshaw Kentucky Straight Bourbon Whiskey. It is not the official bourbon of the Steelers, but certainly trades on Hall of Fame quarterback Terry Bradshaw’s association with the team. Indeed, when Bradshaw Bourbon was announced at the beginning of 2020, the website Whiskey Wash noted the bourbon is 51.9% alcohol. That also happens to be Bradshaw’s pass completion rate through 14 seasons.

The 1800 Tequila tie-ins to the team include the #1800PlayForSweeps, a contest in which fans can win $1,800 worth of Rams merchandise,  and the introduction of a new cocktail, the 1800 LA Rita.

The slickest prize is the 1800 Taco Tailgate, in which the brand teams with actor Travis “Taco’” Bennett for a special tailgate party catered by  the popular LA food truck Mariscos Jalisco. That contest is for Los Angeles residents only.

For a while now, Bud Light has been the official beer of the NFL, and now, Anheuser-Busch-owned Babe is the “official wine sponsor” of the league. Among more unusual “official” sponsors, Caesars is the official casino, and Nationwide is the official insurance company. Perhaps the most unusual is the “Official Clear [teeth]  Aligner Sponsor”  of the NFL. That preferred brand is Invisalign.