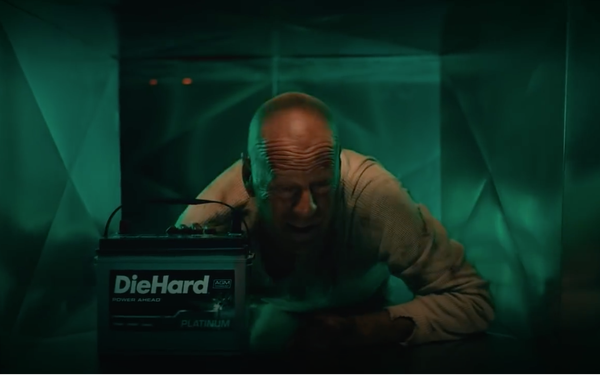 The DieHard battery brand is retuning to TV advertising after a 10-year break via an Advance Auto Parts campaign featuring Bruce Willis.

Themed “DieHard is back,” the action-packed two-minute film features Willis as John McClane -- a character who reflects the qualities of grit, toughness and persistence that are synonymous with the DieHard brand, says Jason McDonell, Advance Auto Parts executive vice president and chief marketing officer.

Willis really responded to the authenticity of the script, he says.

“It actually has over 20 references and Easter eggs regarding the ‘Die Hard’ franchise – from the characters and Argyle’s limo to McClane crawling through a duct to escape, this time with a DieHard battery and, of course, ‘Yippee Ki Yay,’” McDonell tells Marketing Daily. “We also approached it as an opportunity to tell an original story and build on some of the characters’ story arcs. For example, what ever happened to Theo?”

Other characters from the original film also appear in the film including villain Theo, reprised by Clarence Gilyard Jr., and limo driver Argyle, played by De’voreaux White.

The spot begins with McClane and a dead car battery. Before he can make it to Advance Auto Parts, McClane crosses paths with Theo and his crew. After a narrow escape and a chance meeting with limo driver Argyle, the action accelerates. From bad guy takedowns to a giant earth mover chase and, of course, a massive explosion, the film merges the worlds of the action classic “Die Hard” and the battery, showing viewers that McClane and DieHard are equally reliable, durable and powerful.

This is the first time that Willis has reprised his role as McClane in any commercial enterprise.  The "Die Hard" movie connection was a natural and the company is surprised there has never been an integration before, McDonell says.

“But to us, there’s more to it than playing off the ‘Die Hard’ name,” McDonell says. “The traits that endear John McClane to fans, especially his reliability and durability, mirror the brand traits of DieHard batteries. The opportunity to bring the two together in a creative, bold, blockbuster manner to inform, entertain and mobilize motorists was irresistible.”

The spot was created and produced by The Marketing Arm, a Dallas-based creative agency partner for Advance Auto Parts

The film debuted Sunday during the Green Bay Packers versus the Tampa Bay Buccaneers as part of FOX NFL’s “America’s Game of the Week.”

Both English and Spanish 15- and 30-second versions of the spot will air nationally and in key local markets throughout October, which is National Car Care Month.

The spot will be incorporated into the company’s social media on Facebook and Instagram in the U.S. and Canada, as well as digitally on YouTube to drive views of the full-length version on Advance's YouTube page.