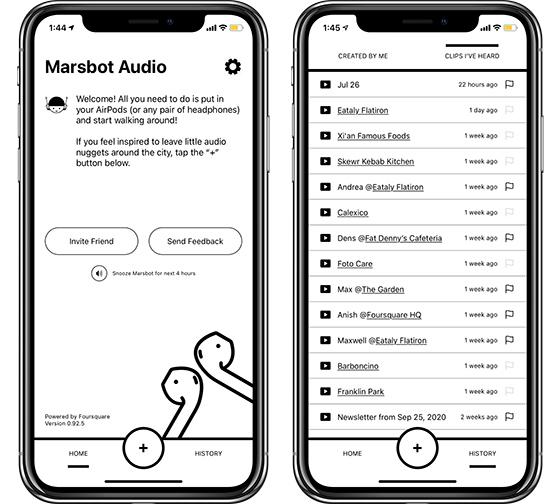 Foursquare has been working on an experiment for the past year aimed at testing the possibilities of contextual awareness and audio augmented reality. The technology has the ability to alter audio advertising forever.

Marsbot for AirPods launched in the Apple App Store on Tuesday. It’s a virtual assistant that whispers local recommendations and other snippets into the wearer’s headphones or earbuds, with no voice search required.

The whisper could include information about a place, an object, a building, some street art, or even a person. It pauses a podcast or lowers the music while it whispers something, but it will never interrupt a phone call.

It’s one of the first apps for AirPods and one of the first viable proactive pieces of virtual assistant software, rather than requiring the need to prompt Siri, Alexa, or Google Assistant.

Think of the app as a “proactive walking assistant,” a phrase coined by Lindsay Zver, from Boston College, according to Foursquare co-founder and executive chairman Dennis Crowley.

Here are some example of how the app works for local businesses: Los Tacos, and Sotto 13. Foursquare developers also wrote code so that every time the person using the app would walk by any McDonald’s in the world, they would hear a whistle -- another experiment in location-based awareness.

The app, developed by the Foursquare Labs, as well as the research and development team led by Crowley, demonstrates how the teams have been exploring several different types of technologies, such as those that understand the surroundings of the person using the device.

“We believe the future of software is apps that understand your context and surroundings, and apps that smartly nudge you when there is something interesting or important at your periphery,” Crowley wrote in a post, explaining that he believes in a proactive virtual assistant.

The app explores the opportunities available to AR beyond the sensory and visual and into the realm of sound.

“While we have apps for our phones and watches and TVs and cars, we have yet to see apps designed specifically for AirPods, specifically all-day AirPod use,” he wrote.

The quest meant trying to solve the question of what it would take for AirPod wearers to leave the buds in their ears all day long, even if they weren’t actively listening to something.

Foursquare’s original focus—to personalize technology that would facilitate serendipity, and software that would encourage and reward users for exploration. “How do you turn the real world into a video game?” Crowley said during a TEDxEast presentation in 2010.

Today, Marsbot for AirPods is only available for iPhone. It’s a prototype, but despite its name it will work with any type of headphones or earbuds, wireless or wired.

“We built it to show where we think the world is heading, as well as to show how Foursquare technology can help developers get there faster,” he wrote.