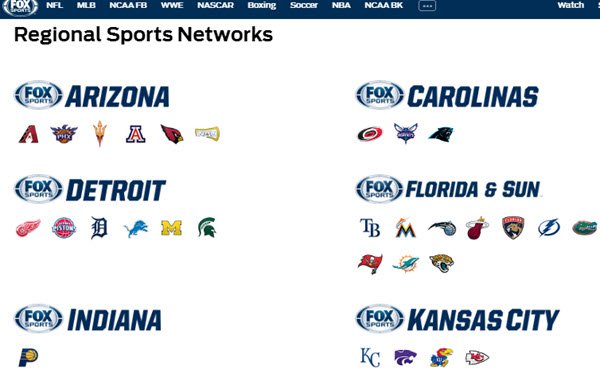 In another blow to Sinclair’s Diamond Sports regional sports networks, Disney’s Hulu is dropping the RSNs as of today.

The announcement comes less than a month after YouTube TV dropped the RSNs. (Those talks have reportedly continued.) Sling TV and Dish Network dropped the channels in July 2019, ad FuboTV dropped them this past January,

With Hulu’s departure, AT&T TV Now — through its $80-per-month plan — is the only remaining vMVPD to carry the RSNs.

Hulu will continue to carry sports coverage from other channels, including ESPN, TBS and TNT.

“We were unable to reach an agreement with Sinclair Broadcast Group to continue offering channels like your Fox Sports RSN, YES Network, and Marquee Network,” Hulu said in a message to subscribers.

“While Sinclair attempted to come to an amicable and fair agreement, Hulu was not willing to provide the RSNs reasonable compensation for their valuable local sports content,” Sinclair stated in a release. “Starting today, the Fox Regional Sports Networks are no longer available on Hulu and consumers will have to look elsewhere to access the content." Sinclair's RSNs can be viewed on most major cable platforms as well as DirectTV and AT&T Now.

Sinclair financed its $9.6-billion 2019 acquisition of Diamond Sports from Disney with junk bonds that declined to distressed levels “amid slow progress in getting carriers locked in,” according to Bloomberg. Diamond’s 23 networks were then hit by the pandemic-driven suspension of live sports.

In July, Sinclair signed a multiyear deal with Comcast to carry all of its TV stations and RSNs on cable, and in its second-quarter earnings call, it said it had about 85% of its subscriber base locked in for at least two years.

Diamond’s debt load was nearly $8 billion as of Q2. In May, after the pandemic hit, Sinclair “tried to ease the burden by asking junior bondholders to accept an exchange that would slash their principal by about half, in return for almost doubling the interest rate and a stronger claim on the company’s assets,” Bloomberg reports. “The deal flopped, attracting only $66 million of the $1.8 billion in notes that Sinclair sought to retire.”

On Thursday, Bloomberg Intelligence analyst Geetha Ranganathan wrote in a note to investors that while losing Hulu is not “a financial catastrophe” for Sinclair, it “points to the risks of increased cord-cutting as pay-TV operators push back on the high costs for sports.”

Hulu will continue to carry sports coverage from channels including ESPN, TBS and TNT.