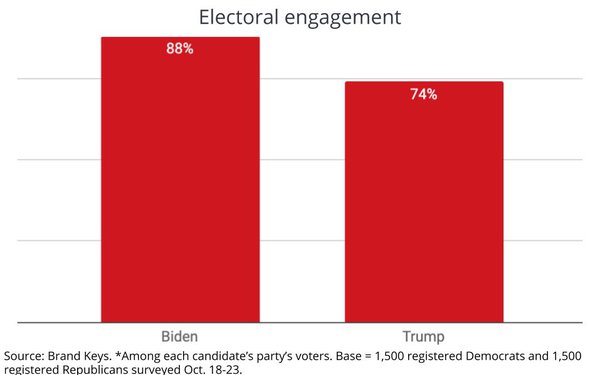 With the level of voter "enthusiasm" predicted to be a key factor driving voter turnout in the 2020 Presidential election, new brand research indicates Democratic challenger Joe Biden is generating a much higher level of electoral "engagement" than the Republican incumbent.

"Biden received an overall rating of 88% from Democrats. Trump received an overall 74% from Republicans," found Brand Keys, which surveyed 1,500 registered voters from each party Oct. 18-23 and found, "Registered Democrats rated Biden strongest on 'trust' (92%), and relatively weaker on 'resolve' (84%). Trump was rated highest by registered Republicans on 'resolve' (85%) and weaker on 'compassion' (65%). The differences are compelling."

"Loyalty and engagement metrics are leading indicators of consumer -- and voter -- behavior," notes Robert Passikoff, Brand Keys founder and president, adding, "They inform us as to how a voter is going to behave. We recognize that few Republicans in the administration or elected officials risk coming clean about President Trumps behavior and agendas, but our psychological assessments reveal the truth about how Republican voters really feel about Trump."

Passikoff notes that "from an election perspective, our model is highly validated," citing similar research conducted in past presidential elections, which predicted their outcomes.
"We called 2016 for Donald Trump too when virtually all traditional polling reported Hillary was going to win. Her emotional engagement with voters wasn't high either," he recalls.