For TV Shows Set In The Past, COVID Is Nowhere In Sight 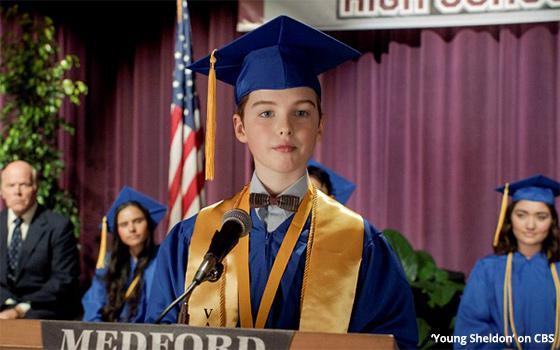 While many of our contemporary scripted comedies and dramas wrestle with how to position themselves in the age of COVID, one category of TV shows has the luxury of passing on the subject altogether.

They are the handful of prime-time TV shows set in past decades when a pandemic such as the one we are living through now was not a subject anyone had any reason to contemplate.

As a result, the producers and writers of shows such as “Young Sheldon” on CBS and “The Goldbergs” and “Mixed-ish” on ABC have no reason to raise the subject either.

It is the prequel series spun off from “The Big Bang Theory” featuring a young Sheldon Cooper, played as an adult on “Big Bang” by Jim Parsons.

“The Big Bang Theory” ended its run in May 2019, but Parsons narrates the spinoff. “The Goldbergs” and “Mixed-ish” take place in the 1980s.

With so many network shows now returning to the air with contemporary subjects such as COVID, politics and protests taking center stage, the shows that are not dealing with these subjects are emerging as exceptions rather than the rule.

In next week's “Young Sheldon” premiere (airing Thursday night at 8 Eastern on CBS), the child genius of the title is seen graduating from high school and preparing to go off to college at an age when most kids (such as his twin sister) are graduating from grammar school.

Obviously, no mention of COVID-19 is made in the show, although it occurred to me that if “The Big Bang Theory” had not been discontinued, the geniuses of that show might have developed a vaccine for COVID-19. Alas.

Meanwhile, in addition to COVID, issues of social injustice will also turn up in some of our returning TV shows.

Most notably, the Black Lives Matter movement comes to “The Neighborhood” on November 16 on CBS when the show starts its season with a racial injustice storyline.

According to a description of the show provided by CBS, a racially charged incident involving another resident of the neighborhood will unite the show's next-door neighbors -- the white Johnsons and the African-American Butlers.

covid-19, television
1 comment about "For TV Shows Set In The Past, COVID Is Nowhere In Sight".
Check to receive email when comments are posted.
Next story loading