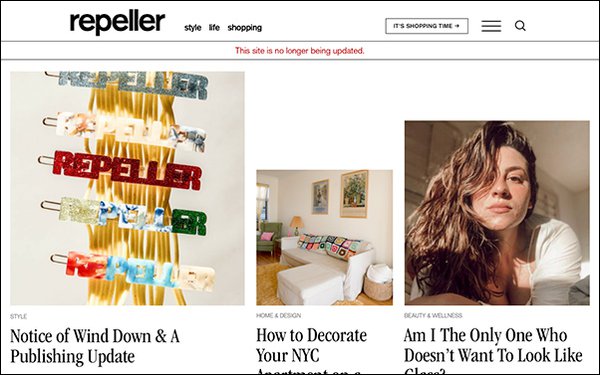 Leandra Medine Cohen announced that Repeller, formerly the fashion blog Man Repeller she founded in 2010 that grew to a digital media brand, shut down.

As of October 23, the site stopped publishing stories, but the archive will remain available to access.

“Thank you to everyone who has contributed their talent and effort to this brand. And thank you, the audience, for having chosen to spend time here. I wish you all the very best,” she wrote in a short post published on the site.

Readers expressed disappointment in the curt message from the founder.

One commenter on the site called it a “a massive let down for MR's decade-long community,” and another wrote, “Is this really all we get!?!?”

Cohen told The Cut: "The company has been self-funded by its operations since its launch 10 years ago as a personal blog, but due to financial constraints, we are no longer able to sustain the business."

In June, Cohen stepped back from the brand after it faced criticism for a lack of diversity in its staff and content.

One employee said she felt “undervalued and less favored than other employees,” according to an essay Cohen published on why she retreated from the public eye this summer.

At the beginning of the pandemic, a number of employees were let go.

Cohen admitted to her “shortcomings as the leader of the company” in the essay.

Cohen also stepped back from Instagram and her nearly 1 million followers, “because fear has frozen me. What initially felt appropriate became safe and then weird.”

In August, Cohen announced she was returning to the site, and a number of changesand initiatives were launched to create a more inclusive company.
The site was rebranded as Repellerin September.
Man Repeller had nearly 2.5 million visits in April, according to SimilarWeb data, and dipped to 1.75 million before the rebrand.
digital, fashion, web sites
Next story loading