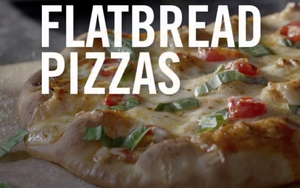 Panera Bread is adding flatbread pizza to its menus nationwide this week in a move that’s less about competing with giants like Domino’s than expanding its menu amid the boom in off-premises dining.

A key to the fast-casual chain’s pizza strategy is to enhance its traditional sandwich, salad and soup offerings with a food that has wide appeal, according to Sara Burnett, Panera’s vice president of wellness, food policy and public affairs.

“In many ways, this is about expanding our consideration set because the first choice that you make is, ‘I’m craving pizza. I’m craving Mexican. I really want a warm bowl of soup,’ Burnett tells Marketing Daily.

“This is just one way for us to expand that consideration set and overcome that veto vote of, ‘hey I’m feeling like this but you’re feeling like that.’ At Panera, you can really have it all.”

Three pizza flavors—cheese, Margherita and chipotle chicken & bacon—began rolling out yesterday and by week’s end will be available at all 2,200 Panera restaurants.

“We have more in the pipeline,” says chief brand and concept officer Eduardo Luz.

Acknowledging that Panera customers have been asking for pizza “for a long time,” the chain decided to launch now “because our customers are saying they want to eat outside of restaurants more and more,” Luz adds. And pizza is a natural for delivery.

Advertising will run across digital and social platforms, television, out-of-home and other media.

Asked which pizza providers Panera considers its competition, Luz says, “It’s a very fragmented industry, but we don’t think about specific competitors. On tests that we did, we see people displaying a lot of interest to complement flatbread pizzas with salads—and you have something for everyone in the family when you do that.”

Panera has drive-through pickup in roughly half of its locations. In addition to curbside pickup, it uses a mix of its own fleet and companies that include Uber Eats and DoorDash for delivery.

Takeaway dining is a trend that continues to benefit Domino’s Pizza, whose Q3 comparable-unit sales at franchised locations rose 17.5%. The chain has been one of the biggest benefactors of the dine-at-home, pandemic-induced trend because it’s always focused on takeout.

“The third quarter marked our 38th consecutive quarter of positive same store sales growth,” CEO Rich Allison said on a recent earnings call. “And 17.5% is the strongest same store sales number we've posted in our U.S. business over the course of that almost decade-long run.”

Among other delivery options, Domino's now allows customers to order pizza to locations as varied as football fields and parking lots.

Meanwhile, things seem to be picking up at Papa John’s, which has faced revenue headwinds since founder John Schnatter left the company amid controversy over his comments about various racial issues.