Harris Poll Reveals A Quarter Of Advertisers Boycotted Google, Too 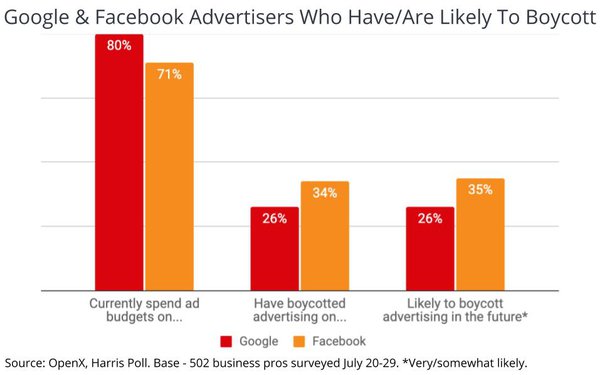 Suppose they held a boycott and nobody noticed? That might be the best way to describe the findings of a study indicating that a quarter of Google's advertisers boycotted it in the past.

The study, part of a national poll of business professionals who say they advertise on Google and Facebook, was conducted by the Harris Poll conducted for digital ad exchange OpenX last summer during the height of an ad boycott targeting Facebook for its lax controls over hate speech, racist rhetoric and disinformation.

While Google was not explicitly targeted as part of that ad-hoc effort, there likely was some spillover to YouTube, which has also come under criticism for its lax oversight and role circulating questionable social content.

While OpenX published some of the Harris Poll findings previously, this boycott data has not been made public until today, according to an OpenX spokesperson.

Asked why there was such a significant response among advertisers who said they boycotted Google, the spokesperson said it likely was attributed to a quasi boycott of YouTube in 2017, "or perhaps the more recent threats around boycotts due to what was deemed as the company's unfair payment to publishers for their content," and offered the following OpenX statement:
“There was no specific boycott we had in mind. The question was just asking broadly if marketers had participated in a Google/Facebook boycott in the past so we weren’t really trying to assess the impact of any one individual incident, and it was more so just intended to look historically at how marketers have acted.
"In this crazy 2020 that we have had, one issue that marketers dealt with over the summer was the Facebook boycott, which is why we included the question. We wanted to look historically how marketers have dealt with social media boycotts, and found that a significant percentage had participated in some extent. This choice of whether or not to spend with the walled gardens is just another example of one of the many things marketers are likely addressing.”

Whatever Google and/or Facebook advertisers have done or thought in the past, the study also reveals about the same percentage -- 26% for Google and 35% for Facebook -- would very or somewhat likely to boycott them in the future.

The findings also come as both companies are scheduled to address Congress today about changing federal laws protecting them from certain liabilities, and as Google is being investigated for antitrust by the U.S. Department of Justice.

Explicit breaks by type of advertiser surveyed by Harris Poll are shown below.