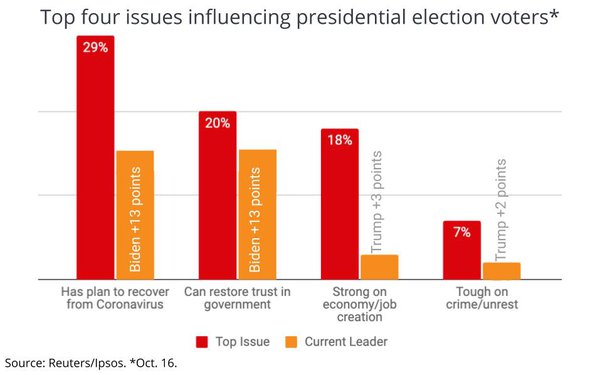 With the COVID-19 pandemic remaining the No. 1 issue influencing American voters, Democratic challenger Joe Biden continues to lead the incumbent heading into next week's presidential election, according to the last of Ipsos' 2020 election analyses before America votes.

In a briefing held Thursday afternoon, Ipsos Senior Vice President and head of its political polling team Chris Jackson presented a slew of data points, including national and state polling, as well as a variety of forecasting scenarios that conclude the most likely outcome is a "narrow" Biden win, with Democrats retaining a majority in the House, but Republicans holding onto the Senate.

Utilizing their forecasting methods, Ipsos analysts gave that scenario a two-in-four probability, while two other extremes -- a "blue wave" giving Biden a decisive victory and Democrats control of the Senate, or a "narrow" win for the incumbent and a status quo in Congress -- each have a one-in-four probability.

Jackson, and his colleague Ipsos U.S. Public Affairs President Cliff Young, spent a considerable amount of the briefing discussing the "uncertainty" surrounding this year's election and the variety of hard-to-handicap factors influencing it. They said the only presidential election approaching this year's uncertainty was 2016's.

While Biden continues to dominate most of the national polling, as well as being favored by most experts, modelers and academics, Jackson and Young said next week's outcome comes down to a handful of battleground states, where the incumbent President scores better than his national performance, although the Ipsos experts nonetheless are calling for a marginal electoral victory by Biden.

They continue to cite the role of key issues -- both nationwide and in states -- as being the major factor, and Biden currently has a 13-point lead on the two top issues: a plan to recover from the Coronavirus; and the ability to restore trust in government.

The incumbent President has marginal leads of three and two points, respectively, on the next two most important issues: Being strong on the economy/job creation, and being tough on crime and social unrest. 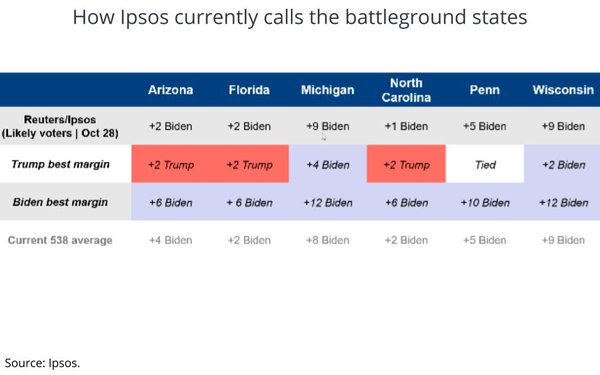