Gut Research Finds More 'Positives' For Biden, 'Negatives' For The Other Guy 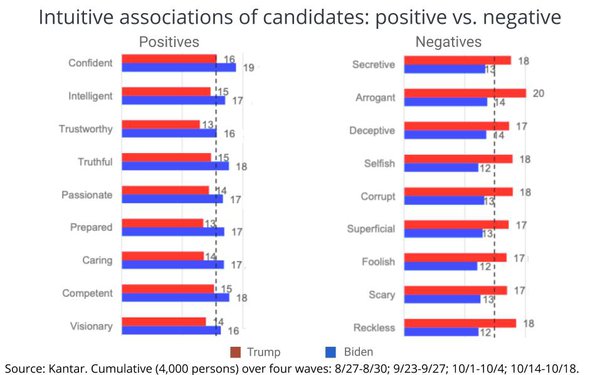 Using a novel technique known as "intuitive research," capable of understanding what people feel vs. what they think of a brand -- or in this case, a candidate -- Kantar found that American voters overwhelmingly have more "positive" associations with Democratic challenger Joe Biden vs. "negative" ones for the incumbent presidential candidate.

The analysis depicted here shows the cumulative responses across four waves between August and in recent weeks, traversing a number of major events including both parties' conventions, two debates, various "town halls," and the President's COVID-19 diagnosis, and while there was at least one positive bounce for the incumbent following the first debate, the overall cume shows most American voters feel markedly more positive for Biden.

The technique utilized a time-based measure asking survey respondents whether they associated each candidate with various positive and negative attributes, and the responses that happened quickly -- in just a few seconds -- were deemed intuitive, while the longer responses were deemed more considered and more cognitive.

Kantar Global Head of Neuroscience Insights Deepak Varma says the technique has successfully predicted election outcomes in the past, including the 2016 presidential election, which found much more negative associations for Democratic candidate Hillary Clinton.

Importantly, he notes that this year's cumulative analysis covers a wide variety of voter demographics, regional breaks and three explicit battleground states -- Michigan, North Carolina, and Pennsylvania -- which generally found the same positive and negative associations for each candidate.

"The cumulative approach gives a more stable view over the period," Varma says of the overall analysis -- adding, however that on a week-by-week basis, both candidates showed "gains or losses" that may have had an impact for undecided voters "sitting on the fence.

"People have started voting early in this election and every event plays a role in swinging some votes," he notes.

cmmr, covid-19, politics, research
1 comment about "Gut Research Finds More 'Positives' For Biden, 'Negatives' For The Other Guy".
Check to receive email when comments are posted.
Next story loading