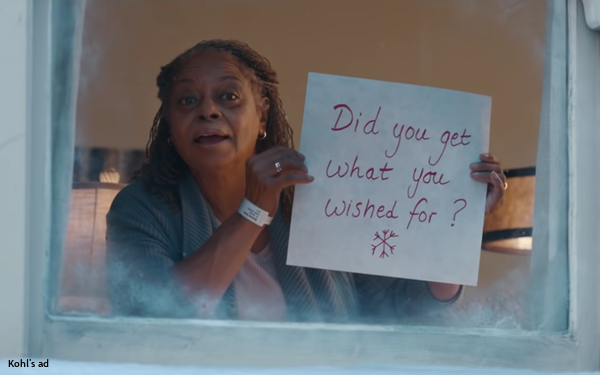 America's retailers are rushing to cleanse people's palates of bitter political slugfests, offering sweet confections of holiday marketing. Macy's, Kohl's and Nordstrom are all following the trend of slightly earlier holiday campaign launches, with each tugging a slightly different heartstring.

At Kohl's, a holiday brand ad called "Give With All Your Heart" focuses on a little girl forming a friendship with her neighbor -- all through the frame of their bedroom windows. The COVID-19 mini-movie, set to Willie Nelson’s  rendition of  "Rainbow Connection," is all about connections and not about stuff.

"During what has been a challenging year in so many ways, togetherness and time with loved ones -- whether family and friends or neighbors and community members -- means so much more this holiday," says Greg Revelle, Kohl's chief marketing officer, in its announcement. "Kohl's is inspiring families everywhere to embrace the spirit of the season by connecting…however that works for them."

The Menomonee Falls, Wisconsin-based retailer is matching that sentiment with its giving, pledging $5 million in family health and wellness grants around the country.

Kohl's is also pushing out messages with new digital and social media activations, using Instagram, including its LIVE function, Pinterest and augmented-reality feature on Snapchat. And it's introducing a virtual pop-up shop in partnership with Bustle.

Macy's, already facing the holiday without in-store Santas and a very different presentation of its annual Thanksgiving Day parade, is also introducing new creative. Called "In Dad's Shoes," the ad tells the story of a little girl who puts on her father's shoes and sees his life in an entirely different way.

BBDO NY created the ad, which is set to run on TV and online.

Nordstrom is taking a very different approach, with ads full of colorful, light-hearted gifting vignettes. Rather than setting it to Christmas music, the retailer chose "How Sweet It Is (To be Loved By You)," performed by Sabine McCalla, a gospel, folk and country-blues singer from New Orleans.

Themed "Make Merry," the campaign was produced in-house by the Seattle-based retailer, with Matt Jones (son of i-DMagazine founder Terry Jones) directing and photographing it.

"This campaign aims to capture the joy of people that are meaningful in our lives," says Nordstrom chief marketing officer Scott Meden. "Whether it's our friends, families or our customers -- we want to pay homage to the experiences that bring holiday connection to life because in the end, it all comes down to a feeling."

Nordstrom plans to run the ads on TV, video, print and out of home.