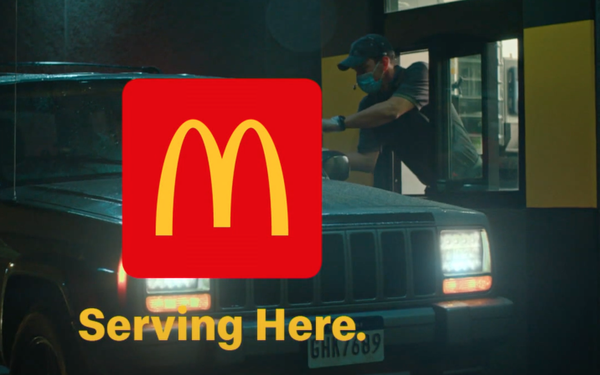 “Accelerating the arches” is the overarching description of a new growth strategy at McDonald’s.

It leans heavily on purpose-driven, culturally relevant marketing and includes an expansion of chicken offerings and the introduction of the McPlant menu of plant-based meat substitutes.

McDonald’s launched a campaign called “Serving Here” that it hopes will better connect the QSR chain with local communities.

“We want to move beyond brand engagement to brand advocacy,” global CMO Alistair Macrow said during a lengthy presentation accompanying the release of Q3 financial results.

U.S. comparable-restaurant sales rose 4.6% in the period ended Sept. 30, benefiting from what the chain described as "strong average-check growth from larger group orders as well as strong performance at the dinner daypart." Renewed marketing spending helped drive "low double-digit comparable sales" for the month of September.

Four commercials in the new campaign were created to communicate cultural relevance by focusing on communities, customers, McDonald’s employees, franchisees and suppliers.

“Accelerating the arches is rooted in our belief that the next chapter of our growth will depend not just on what we do, but how we do it in nearly 40,000 communities around the world,” said president and CEO Chris Kempczinski.

A spot titled “Here” shows vignettes of American life to convey how families, communities and individuals “show up to make a difference in the places they call home.”

In a commercial dubbed “Everything Changes,” a family’s journey through childhood illness is chronicled in relation to the work of Ronald McDonald House Charities.

The underlying concept of the “Serving Here” campaign is to link a “big, faceless, global corporation” to local McDonald’s restaurants and communities.

“That separation between the corporate brand and the consumer brand doesn’t work in today’s world. They are inextricably linked,” said Kempczinski.“We’re taking a stand because if we don’t, it will impact how consumers view McDonald’s. And that could negatively impact the business and the appeal of the brand. We need to do more to embrace the shifting expectations of a modern corporation.”

“Serving Here” spots will run through end of the year on national TV, online video and streaming audio.

Starting tomorrow, McDonald’s will run full-page ads in more than 150 newspapers to document how the chain serves local communities. The ads will consist of letters signed by Kempczinski and local franchisees.

McDonald’s believes that if it better engages with customers, they will help to promote the brand.

The chain recently leveraged the appeal of rapper Travis Scott  and Colombian singe J. Balvin in an initiative called “Famous Orders.” Both of the celebrities touted their favorite McDonald’s food, prompting social media users to amplify the concept.

“We’ve had incredible cultural engagement. When we announced the Travis Scott meal back in September, we hit multiple records across our social media platforms,” Flatley noted.

McDonald’s will introduce a crispy chicken sandwich early next year as part of the company’s effort to expand chicken from a product to a “platform."

In addition, it plans to debut McPlant menu items that will be plant-based meat substitutes in certain markets next year.