New Fox News Slogan Appears To Be Jab At Trump; Fox Says It's Not 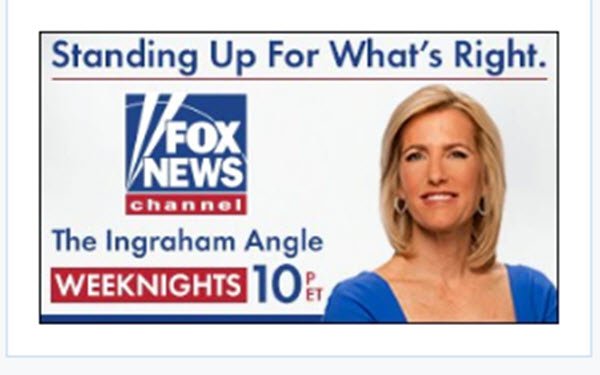 Fox News has unveiled a new marketing campaign with the slogan: “Standing Up For What’s Right.”

Whatever other critics might think about the accuracy of that statement, Business Insider noted that the timing makes it appear to be "an act of defiance in [Fox News'] ongoing feud" with Trump.  The new slogan, now appearing on the network’s prime-time chyrons and its promotions, follow Trump’s escalating attacks on Fox News, via Twitter, starting last Thursday, BI pointed out.*

A Fox News spokesperson, however, told Digital News Daily that the new campaign, which has been in the works for some time, represents a "pivot" to emphasizing Fox News' opinion content, after a year-long "Democracy 2020" campaign tied to the election. The word "right" is meant to carry two meanings, including an allusion to Fox's political leanings, she says.

Trump, in one recent tweet to his 89 million followers, attacked Fox News while acknowledging that the media outlet was a critical factor in helping him get elected in 2016:

“@FoxNews daytime ratings have completely collapsed,” he posted. “Weekend daytime even WORSE. Very sad to watch this happen, but they forgot what made them successful, what got them there. They forgot the Golden Goose. The biggest difference between the 2016 Election and 2020 was @FoxNews.”

Trump has fallen out with Fox News before, but the network’s calling of Arizona for now president-elect Joe Biden on election night, and calling Biden’s win on the following Saturday, soon after other networks, seems to have pushed Trump's anger to a new level.

Speculation about Trump possibly becoming a major investor in and/or star of, his own news network is widespread, as is speculation that he may opt to start his own network.

The Wall Street Journal recently reported that Hicks Equity Partners, a hedge fund with ties to a co-chair of the Republican National Committee, was having investment and acquisition talks with right-wing Fox News competitor Newsmax, which never fails to relay Trump’s positions and misinformation. Newsmax said it has no deal with Hicks.

Another right-wing outlet, One American News Network, denied a Vanity Fair report this past spring that Donald Trump Jr. and the Hicks family had invested in OANN.

Last Thursday, Axios reported that Trump wants to start a digital media outlet to compete with Fox — as a streaming channel, which would be easier than setting up a cable network.

Also last week, on MSNBC, Donny Deutsch , former chairman of Deutsch Inc., said that Trump “is in pre-production now… He is going to be starting the Trump Revolutionary Network—a subscription model. He has already trademark ‘TeleRallies.’”

Fox News remains the No. 1 cable news channel, averaging 5.36 million viewers last month and dwarfing Newsmax and OOAN. Fox also led in viewership on election night, with 13.6 million, followed by CNN with 9.1 million, according to Nielsen.

However, since Biden won the election, Nielsen numbers have shown increased viewership for CNN, including pulling 13.6 million viewers in prime time on the Saturday Biden clinched the election and he and Vice President-Elect Kamala Harris delivered victory speeches. MSNBC came in second (8.5 million), followed by CBS (5.6 million), ABC (4.4 million), and Fox News (2.9 million).

Asked about Trump as a possible competitor, during an earnings call on Nov. 3, Fox Corporation CEO Lachlan Murdoch said: “We love competition. We have always thrived with competition,” noted BI. He also said Fox now sees its competition “as no longer only cable news providers, but also as the traditional broadcast networks.”

*Note: This piece was updated to include input from Fox News. After Business Insider's original article, the outlet made some unhighlighted edits to the piece, most notably removing the words "an apparent act of defiance in its ongoing feud with President Donald Trump" in the story's lead.

fox news, news, politics, television, twitter
1 comment about "New Fox News Slogan Appears To Be Jab At Trump; Fox Says It's Not".
Check to receive email when comments are posted.
Next story loading