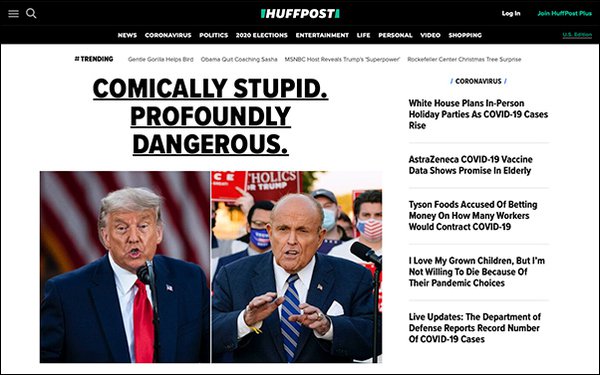 BuzzFeed is buying HuffPost, the digital media company created by Arianna Huffington, Kenneth Lerer and others in 2005.

Verizon Media, HuffPost’s current parent company, also announced an investment in BuzzFeed. It will have a minority stake in the company.

“I have vivid memories of growing HuffPost into a major news outlet in its early years, but BuzzFeed is making this acquisition because we believe in the future of HuffPost and the potential it has to continue to define the media landscape for years to come,” stated Jonah Peretti, founder-CEO of BuzzFeed.

Peretti is also one of the founders of HuffPost, which was originally called The Huffington Post.

Peretti will run the combined company, according to The Wall Street Journal. BuzzFeed will look for a new editor in chief of HuffPost. Lydia Polgreen left the position in March.

“With the addition of HuffPost, our media network will have more users, spending significantly more time with our content than any of our peers," Peretti stated.

Together, the companies reach hundreds of millions of young, liberal-leaning audiences with news and culture content.

BuzzFeed and Verizon Media will syndicate content across each other’s properties and collaborate on ad products and commerce, he noted.

Guru Gowrappan, CEO of Verizon Media, said he and Peretti “realized BuzzFeed’s strategy would complement HuffPost’s roadmap, injecting it with new energy and growing the brand into the future.”

“We are deeply invested in the continued success of HuffPost, and I couldn’t think of a better partner to take HuffPost to the next level,” he added.

HuffPost will continue to contribute to Verizon Media’s portfolio. Its content will be amplified via Yahoo channels and products, which are owned by Verizon Media.