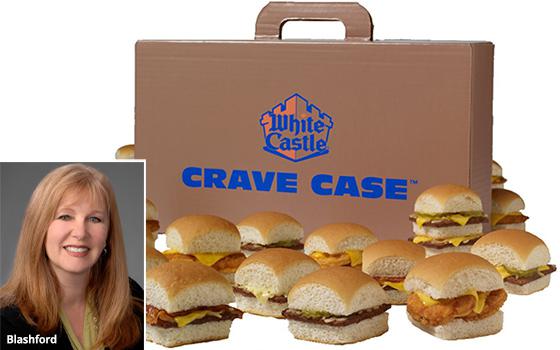 White Castle was “craveable” long before the term became a QSR cliché. In fact, since its founding in 1921, the brand quietly pioneered many conventions of the industry. It tried QSR delivery in the 1930s, had drive-thrus and app-based advance ordering years before most competitors, and its product went into grocery stores over 35 years ago.

Not surprisingly, this QSR/CPG hybrid was very well positioned to weather, even prosper from, the pandemic year.

CMO Lynn Blashford explains how a highly centralized structure of nearly 400 company-owned outlets helped White Castle make the necessary pivots. At the same time, the company structure also allowed it to fully embrace the social protests and calls for justice from which many other brands demurred. You can listen to the entire podcast here.

MediaPost: Since White Castle owns and operates all its own restaurants, how have you chosen a different growth trajectory?

Lynn Blashford: When we think of our strategy, we're really very much a regional chain, mostly Midwest and East Coast. About 35 years ago [CEO] Lisa's father Bill Ingram was our president, and he realized that people were coming into the restaurants and wanting to pack up 100 sliders from Chicago or from New Jersey: ‘I'm driving out west and the family doesn't let me come without White Castle.’

And there was this little invention in kitchens popping up everywhere, called the microwave. So he went to food manufacturers and said, because we don't want to franchise, we're not going to grow our restaurant footprint that fast, but clearly the crave has now expanded coast to coast.

He was turned down by multiple groups. So he decided we would make our own. And we packaged those up into our own frozen packaging. Over 35 years ago, we started selling to grocery.

So I think that's part of what's helped the brand in the longevity and the element of why it has become such a craveable item,  because there's really no replacement that you can go that has a similar taste, unlike getting a hamburger somewhere else in our competitive set. Everybody has something craveable. And for us it's very much been our slider, which hasn't changed for decades.

MP: Is there anything special or different about the Castle demographic? Is it very much in line with the rest of QSRs, or are there any sort of peculiarities or wrinkles to your demographic?

Blashford: I think the demographic on the restaurant side might skew a little more urban because of the locations that we've been in for decades. So unlike building out in the suburbs, which a lot of newer brands will be doing, we have a really nice mix of urban and suburban locations very much dominated by urban footprints out there. And because of our longevity, our customer has a tendency to be maybe just a little bit older, too. So that's why a lot of our media has focused on growing that next generation of cravers.

MP: Are there particular channels, especially on the digital side, that you've leaned into -- or emerging channels that you found have been especially successful in finding new audiences?

Blashford: Yeah, I think finding new audiences has been almost as much about the content as it has been the media channel. It's really the combination of the two that's required.

MP: What kind of content are we talking about?

Blashford: A lot of the content types that we look for that help us expand our audience reach are around a younger audience. We've done things with The Onion. And you can think about the affinities for this category around humor and sports and entertainment and gaming. We'll look to a partner like Twitch or Thrillist or The Onion and [give] them a little bit more free rein with the brand.

That's the other piece. We're not very controlling. We like to have fun. We're clearly comfortable with different dayparts such as late night, where some of those content partners may have the ability to really be much more creative than then we can.

MP: How did you manage the crisis from a marketing perspective? What pivots did you have to make?

Blashford: During the week of the pandemic being declared, we were about to launch  a new advertising campaign and a brand campaign we were working on. That was very unifying for both the restaurants and the retail products, which was ‘Long Live Sliders.’ And we had done all the filming, and actually, it had to stop because we were in New York at the time.

We do find through social media that a lot of people like to enjoy sliders in bed at night. So we fortunately had filmed that element, which was going to be part of the campaign. And we really had to just put everything else on the shelf for a while.

And that became the center point of the campaign, that was more around ‘bring a little of our castle to your castle.’ We just leaned into that for the next few months.

Now it's more about promotions for the restaurant, around bigger pack sizes, bigger meals. People are going out less but checks are higher, baskets higher.

MP: Did you already have any deep relationships with third-party delivery vendors before the crisis, and where is that now?

Blashford: We were very fortunate that we had been growing our delivery partner business for the last couple years. Our relationships were solid and it wasn't really new to us, operationally. So yes, easily that business doubled right away for us.

MP: And you are working at a particular advantage in this case, owning and operating all of these venues. You didn't have to deal with convincing franchisees to buy into the delivery infrastructure.

Blashford: Yes, that is very much a benefit of being privately owned and not having franchisees. I sit right across from our head of operations and the marketing team. We’re small enough that everybody is tied into all the decisions.

Our executive group went to meeting daily from meeting every other week. And we were able to make decisions very fast. We have relationships already tied in. We had actually launched online ordering in our app eight years prior to this, so we had a lot of experience.

Our business is less like a burger chain. People buy White Castle more in volume and shareable than just going in for a combo meal at a burger chain for lunch. We knew this aspect of our business was already important. We were already into delivery and we had already been into online ordering for quite some time. And we had the drive-thrus in  the vast majority of our Castles, so those were open and ready to go. And then with the products in the grocery store, it boded really well for having those two divisions of our business to balance each other out.

MP: So are you overall up year over year?

Blashford: I can say we are up year over year.

MP: And customers book delivery through your own app? And how do you manage that? Are you handing them off to particular third-party vendors through the app?

Blashford:  Well, actually we tested delivery in the '30s. We used to deliver on college campuses. We tested delivery again about eight years ago, our own delivery system, similar to pizza. And it's just too difficult. If you're not in the delivery business to try to really commit to having a staff of delivery drivers and the training and everything that goes along with that. This is why we've been in delivery business for a bit with third-party partners. We started that about three years ago. And yes, we handed it off to them.

MP: What have been the main changes in your marketing mix over the last six to nine months?

Blashford: It's been very pivotal and it's really transformed our mix in a way that says, what do we need to do to stay top of mind at the same time deliver profit to the company at a time that is just still a little uncertain.

So our mix has shifted to more digital and social. We really pulled back on the markets that are doing very high delivery, like the East Coast, New York, New Jersey. Those DMAs are much more delivery-oriented, than maybe a Louisville, KY or St. Louis, maybe. So we really went market by market to figure out what is the right mix for each and every one of these DMAs. We cut back pretty heavily on a lot of traditional media and a lot of print. There was a lot less couponing and discounting going on, too.

MP: Have there been any interesting discoveries by doing that? As people have been pushing and pulling at some of these marketing leavers over the last six months, many marketers seem surprised how little it impacted business.

Blashford: I don't know if we found too much surprise. The business intelligence team on our end would say it's about the most difficult time in order to try to isolate what is working and what is not, with just the natural surges and business that are happening.

The one piece that changed more than anything has been around social issues. So it was less about our marketing, but the pullback on traditional media and heavier emphasis into social allowed us to tell a greater breadth of story for our brand.

So, if anything, it was more about some of those content shifts. At least a third of our content was around either social injustice or #StopHateForProfit. We called it Crave The Good, sharing how we're feeding healthcare workers, sharing stories of what others are doing in their community during these times. It gave us an opportunity to flex what really comes from our heart and soul more, and our marketing team loved that. So it was really a great time to kind of flex that element of our brand that usually gets a little more of a secondary role.

MP: It sounds like it didn't have any impact negative impact on sales and performance.

Blashford: That's true. A couple of years ago, if you had said anything about putting something political about your company, the attorneys and half the company would have been like, oh no that's taboo.

But there was just such a social change this year -- and especially from youthful movements, from our own communities and our own team members. Everybody had almost this pent-up desire to share more about who we are, we felt comfortable doing it because we are in many urban communities. And we do represent a huge diversity on our team members in the Castle. The vast majority of our general managers are women. And we have a very high [diverse] representation.

There's always going to be some backlash. But we were okay with that and just prepared for it. You always get the comment about I don't want my food to be political, please don't make me choose sides.

But I’d say, for the most part, people were very supportive. It's always really interesting to watch the comments of our cravers who stand up for the company to those that are making other negative comments. We never come back and tell anybody, their opinion isn't valid or wrong. But it's interesting to see how the others in your feed will stand up for the company and be the ones to share their stories and take up for you.