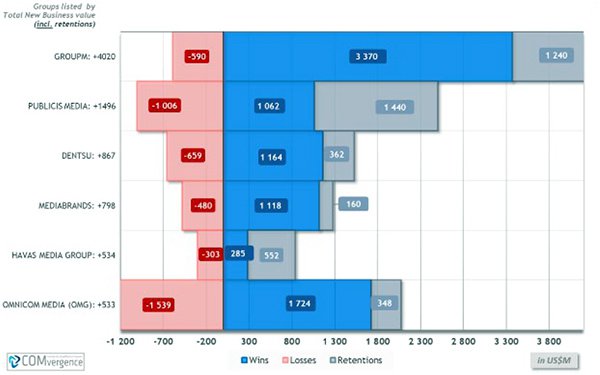 It’s win, place and show for GroupM agencies in the global new business department according to an analysis of media agencies by COMvergence for the first nine months of the year.

Wavemaker is top-ranked with net new business (which includes losses and retentions) of $1.1 billion. COMvergence said the strong showing was due in large part to performance in both China and the U.S. The shop won pharmaceutical company Novo Nordisk’s $400 million assignment earlier in the year and more recently picked up Pernod Ricard’s U.S. account.

MediaCom is second-ranked with net new business of just over $1 billion while Mindshare is a close third ($992 million). MediaCom’s total was boosted with the award of the $190 million global media AOR for Uber in October. Mindshare has done well in China and earlier this year won the WW account for North America.

By holding company GroupM not surprisingly led the way with over $4 billion in net new business, followed by Publicis Media and Dentsu.

The rankings are based on an analysis of 1,915 media account moves and retentions across 45 countries totaling approximately $13.8 billion in billings. That total was about $4 billion lower versus the rundown COMvergence did for the same period a year ago.

About $4.5 billion in spending is attributed to U.S. pitches, while China accounted for nearly $3 billion.