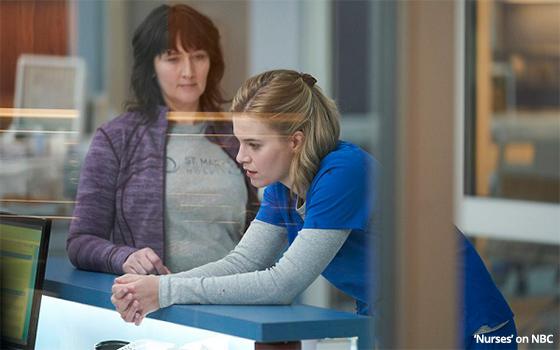 One watches a new TV show such as this medical drama called “Nurses” with great hope that it will emerge as a new hospital show like no other that has come before it.

But unfortunately, where this show is concerned, this is not the case.

In fact, it is rarely the case in television. Cop shows, court shows, outer-space shows and family sitcoms almost always come out pretty much the same or perhaps different from their antecedents by a factor of, say, 10%.

“Nurses” is no exception. It is a show like many others too numerous to count, and going back too many years to try and remember.

Both shows are imported from Canada for repurposing here in the United States on NBC, which seems to have picked them up to make up for a shortage of American drama series right now due to the COVID-19 restrictions that hampered production over the summer.

“Nurses” and “Transplant” were evidently produced before the COVID era because the earnest doctors and nurses in both shows have no COVID patients.

On Monday's premiere of “Nurses,” a new crew of young rookie nurses is seen on their first day on the job at a large hospital somewhere in Canada. This premise is similar to a hundred other “first-day” scenarios in medical dramas involving, for example, young naïve residents.

Like the young interns of other shows, the newbie nurses in “Nurses” are very green, and hoping that Day One will be routine and easy. But suddenly, a man intentionally drives a van into a crowd of people somewhere and it's all hands on deck in this hospital's emergency room.

Will the earnest young nurses rise to the occasion and perform well enough at their jobs to see another day of employment? The obvious answer is: Probably. Otherwise there would be no show.