'Honor' System: Just Because I Bailed Doesn't Mean You Should 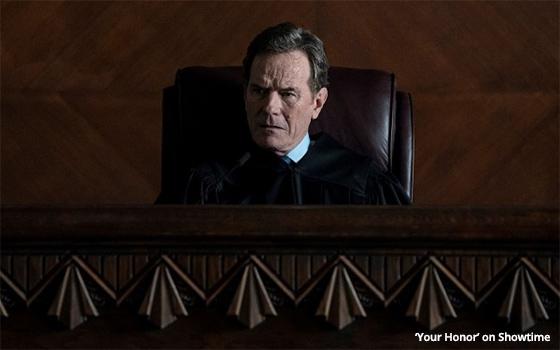 I made it up to a few seconds before the 13-minute mark.

It was then that I felt I had to bail. This TV show was simply too much to bear. I even told myself that the scene I was watching would soon be over, and the reason for its potency was because it depicted the extremely violent incident that forms the foundation for this show's entire story.

After this scene was dispensed with, there would likely be no more like them -- at least not any time soon. And yet I bailed anyway, which is not what I usually do at such times.

Such are the responsibilities of a TV reviewer -- to see a show through to the end, no matter how horrendous or excruciating the experience might be.

But not this time. So sue me. Or if you wish, please do not consider this TV Blog to be a full-fledged review of the first episode of this new Showtime drama called “Your Honor,” premiering this coming Sunday.

All who wish to sample and watch this series when it premieres this weekend are welcome to do so. I won't militate against it. In fact, this show's intensity is what many people might watch it for.

Our television dramas are often this way -- intense, tragic, graphic. This one too bears all the earmarks of today's Quality (with a capital “Q”) TV dramas.

Apparently filmed on location in and around New Orleans, “Your Honor” seems meticulously made with a level of proficiency that was once rare in made-for-television productions but nowadays is de rigueur.

The violent scene that unfolds at about the 12-minute mark of Episode One is a case in point. It is designed to pack a punch. It comes on suddenly with great and effective impact. As such, it is extremely well done. Mission accomplished.

It involves two characters -- one who commits this apparently accidental act and the victim whose suffering brought on the decision to end this viewing experience because this victim's agony is rendered so realistically.

And not only that. The perpetrator also is seen suffering from a physical malady of his own, and also his panic-stricken realization of what he has done and how it will now change his life.

The star of this new limited series is Bryan Cranston (pictured above), who is only partially glimpsed in the show's first 12-plus minutes. But he is the “Your Honor” of the show's title -- evidently a local judge and also the father of the person who is the perpetrator referenced above.

Judging by the show's title, he will undoubtedly emerge as the central character in the series, which is only fitting because Cranston is the star of the show and its primary attraction.

The show apparently deals with the consequences of his child's act -- among other things, what the judge intends to do about it and how the victim's family is likely to react.

The operative word in the show's title is “Honor.” It implies that the reactions of the parties affected by the pivotal incident seen in Episode One will be guided by each family's particular code of honor.

The TV Blog wishes them all well, but if this show is anything like the majority of TV dramas that have come and gone over the last few years, my money is on bad, not glad, tidings for all involved.

“Your Honor” premieres Sunday (December 6) at 10 p.m. Eastern on Showtime.