Land Of 'The Unicorn' Is Tone-Deaf COVID-Free Zone 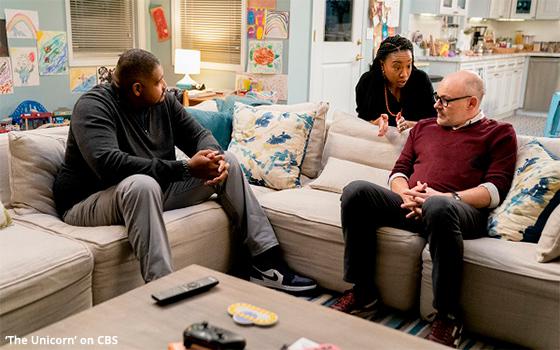 An episode of “The Unicorn” on CBS this week makes an attempt to join the national conversation about racial injustice.

With this episode (airing Thursday night), the writers and producers of this sitcom apparently hope to signal that their show -- a contemporary comedy about one single man’s search for love -- is in tune with their audience here in the late fall of 2020.

But there is one thing missing -- COVID-19. Instead, this show is more like 2019, when COVID-19 was nowhere in sight. No one wears a mask, no one social-distances, no one mentions the pandemic that has upended all of our lives.

But race relations get a superficial going-over when one character in the show, a white man, gives an 11-year-old African-American boy a light blue water pistol for his birthday.

Unfortunately, this kind of toy is forbidden in this African-American household because the boy’s parents believe their son will be in danger of being shot if the toy he is carrying is mistaken for a real pistol.

This situation forms the basis for a series of awkward conversations between this show’s white and African-American characters that adds nothing to the national discussion this show seems intent on joining.

To be generous, the people who made this episode were no doubt earnest in their intention to provide a sitcom-level lesson in cross-cultural understanding. But the problem is, a show like this is not the place to do it.

At all other times, this show -- now in its second season -- is about subjects that are far more mundane.

For example, the other main storyline in this week’s episode is the aforementioned single man’s struggle to decide whether or not to buy his new girlfriend a birthday present.

Spoiler alert: He buys her a plant.

This week’s episode of “The Unicorn” airs Thursday night at 9:30 p.m. Eastern on CBS.