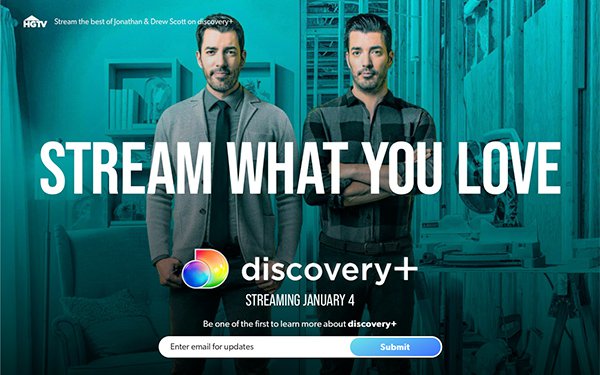 Discovery’s long-awaited new streaming and direct-to-consumer effort -- discovery+ -- has struck a major launch distribution deal with Verizon, giving the service a boost in terms of subscribers for its launch on January 4, 2021.

In a virtual video presentation, David Zaslav, president/CEO of Discovery says Verizon will offer discovery+ to its “tens of million U.S subscribers”, free for up to 12 months.

The streaming service is the cable TV network company’s major effort to move aggressively into the space -- something other major cable and/or broadcast TV network companies have pursued this year.

Discovery+ will be offered with two options: An “advertising-lite” version at $4.99 a month and an ad-free option for $6.99 a month. Launch advertising partners include Lowes, Pepsi, Toyota Motor, Boston Beer and Kraft Heinz.

Discovery did not provide details on the advertising load.

It will initially offer 55,000 episodes from 2,500 current and library shows. Two new series will come from Discovery veterans Chip and Joanna Gaines; and producers Will Packer and Kevin Hart.

In its first year, discovery+ aims to have more than 1,000 hours of original programming. The new streamer will air the Tokyo Summer Olympic Games in Europe. Discovery’s Eurosport network will also support Discovery+ with content.

When it launched over a year ago, Verizon struck a similar year-long deal with Disney+, which gave that service a strong 10-million-subscriber launch platform.

In addition, Discovery says discovery+ will be available across major platforms, including connected TV, web, mobile and tablets.