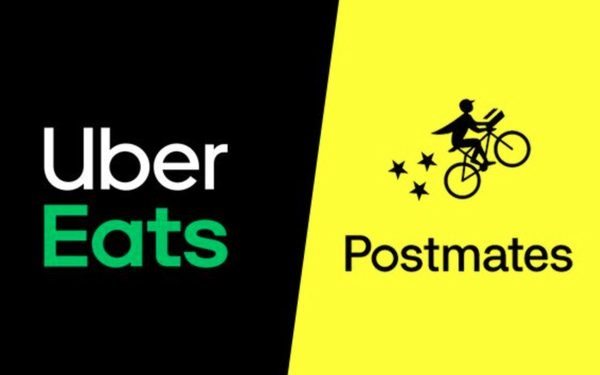 Now it’s a done deal, valued at some $2.65 billion that will integrate the U.S. operations of Uber Eats and Postmates—placing three companies on top of the burgeoning third-party delivery space.

Meanwhile, DoorDash is hoping to raise about $2.8 billion in an initial public stock offering that will help to fuel its expansion beyond food to an array of merchandise.

According to ecommerce data provider Edison Trends, DoorDash and its Caviar unit held 50% of the food delivery market in October, based on total dollar sales. Combining Uber Eats (26%) with Postmates (7%) puts Uber Technologies solidly in the #2 position.

Third-place Grubhub, with 16% of the market, was recently acquired by European food delivery service Just Eat Takeaway after being courted by Uber—a deal that had also faced antitrust scrutiny.

After Uber made known its intentions for Grubhub, Democratic U.S. Senators Amy Klobuchar, Patrick Leahy, Cory Booker and Richard Blumenthal wrote to the Department of Justice and Federal Trade Commission on May 2. They urged the government to “closely monitor the negotiations of this potential transaction and to initiate an investigation if the parties reach an agreement to merge.”

About a month later, the Uber-Grubhub deal fell apart.

In September, the Justice Department sought more information about the Uber-Postmates hookup, as reported by Business Insider, which interviewed Sam Weinstein, a law professor at Cardozo who previously worked in the DOJ's antitrust division.

If there are only a few markets where buying Postmates would give Uber a dominant market position, Weinstein said the DOJ could force Uber to divest some of its contracts in those cities.

That appears to have happened earlier this month—although on a seemingly small scale—when Uber got the green light to pick up Postmates.

For perspective, Postmates serves more than 600,000 restaurants and retailers, while Uber Eats has more than 500,00 restaurant partners, including QSR giants McDonald’s, KFC and Burger King.

On Nov. 9, Uber said the Justice Department had granted “early termination” of the waiting period for regulatory approval of the Postmates deal.

All Uber had to do was agree to “waive exclusivity provisions between Postmates and approximately 800 restaurants” in specific ZIP codes. Uber also agreed not to make exclusivity agreements with those restaurants for a period of six months after the deal closes.

According to an Uber 8-K filing, the largest number of those ZIP codes are in Los Angeles—followed by Miami, Orlando and Tampa Bay, Florida and certain areas of Nashville, New Orleans, Las Vegas, Charleston, South Carolina, Bellingham, Washington, El Paso, Texas and Arizona.

Meanwhile, DoorDash says it serves more than 390,000 merchants—the majority of which are restaurants. Launched in 2013 in California, the company has since expanded to all 50 states. It has partnerships involving more than 175 of the 200 largest restaurant brands.

In its IPO prospectus, DoorDash said it wants to expand beyond food and deliver “anything within a city” and build products “that transform the way local merchants do business and enrich the communities in which they operate.”

Although DoorDash lost $149 million on revenue of $1.92 billion in the nine months ended Sept. 30, its spending on sales and marketing increased to $610 million from $445 million in the same period of 2019.

The company’s digital marketing continues to focus primarily on how it helps local businesses and families during the pandemic, along with supporting its delivery Dashers—as seen in this spot.

Uber Eats has gone more in the direction of athletes and celebrities, as in this video—which has garnered negative feedback from conservative groups for featuring "Queer Eye" star Jonathan Van Ness, along with championship gymnast Simone Biles.

Likewise, PostMates has teamed with such notables as NFL quarterback Patrick Mahomes and entertainer Katy Perry.