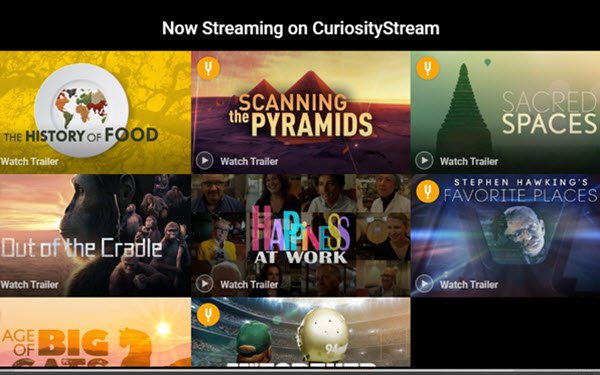 "CuriosityStream was built to fulfill an absence in the market of a factual streaming service focused on quality unscripted and uncontrived content,” the company said in a statement first published by NexTV. “As we’ve seen in the recent past, many broadcast and cable brands must contend with legacy TV assets and myriad rights obligations as they attempt to accelerate their move into the direct-to-consumer world. As a streaming pure-play, we are free of these challenges and able to scale our business based on audience needs. Our focus is on continuing to curate an unrivaled nonfiction library and leverage our diversified distribution models to serve up the best factual content experience in the world.”

The “uncontrived” adjective appears to be a jab at the nature of some of Discovery’s unscripted content, perhaps in response to Discovery’s boast that its new platform, launching January 4 in the U.S., will have the largest content library of any streamer at launch.

The statement also alludes to the complications that any company still in the legacy cable TV arena, including Discovery, must address in venturing into streaming.

And it echoes a statement made by Hendricks in October, when “factual entertainment” company CuriosityStream combined with Software Acquisition Group and went public with a NASDAQ listing.

“Investors will have the unique opportunity to capitalize on a ‘pure-play’ streaming media service that is not burdened with legacy linear TV assets in cable and broadcasting,” Hendricks said at the time. “With our public debut, CuriosityStream will continue to offer compelling direct-to-consumer offers and innovative distribution models that provide curious viewers around the world with content that informs, enchants and inspires.”

In introducing Discovery+ on Wednesday, Discovery announced a free service tie-in with Verizon — and projected an eventual global user base of 300 million, including 70 million in the U.S. — but made no mention of distribution agreements with major players such as Roku and Amazon Fire.

According to CuriosityStream, its platform is accessible worldwide on the leading mobile, tablet, computer and TV platforms (including smart TVs such as Sony, LG, Samsung and Vizio); streaming devices such as Roku, Amazon Fire TV, Xbox One, Chromecast, and Apple TV; and mobile platforms such as Android devices and Apple iPhones and iPads.

In addition, CuriosityStream has cheaper direct-to-consumer options than Discovery+, which will charge $4.99 per month for a “ad lite” version with about five minutes of ads inserted in shows, or $6.99 for an ad-free version.

“Will anyone, or enough anyones to make financial sense, line up to pay $5 a month (with ads) or $7 (ad free) for the privilege of watching basic-cable shows on demand?,” NexTV’s David Bloom asks. “Millions of households have already spent months or years getting used to watching either premium services such as Netflix and HBO Max, or free ad-supported alternatives such as Tubi and Pluto. Along the way, those audiences have been cutting cable cords at record rates, a trend that seems likely to continue.”

“Now Discovery Plus must reach those audiences on a new platform, with different audience expectations,” he adds. “It must not only get audiences to pay specifically for Discovery Plus. It must also keep serving up content that will keep them there. That requires a different set of skills, particularly when it comes to creating programming worthy of tuning in when there are so many attractive, well made, and heavily marketed options elsewhere.”