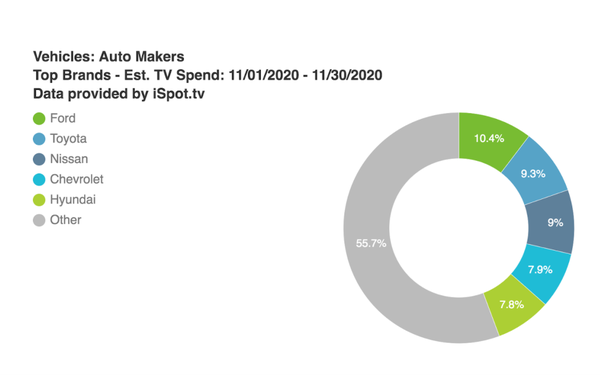 Automakers spending on TV is trending upward based on November figures.

COVID-19 game cancellations notwithstanding, football drove a good deal of impressions, with more than 23% of automaker TV ad impressions coming from either NFL or college football games. However, sports made up just 32.1% of impressions on the month, vs. over 39% in November 2019. Reality TV also made up 12.5% of impressions, and movies were 9.7%.

Many of the top spots (six of the top 10 by impressions) were holiday-focused as auto brands continue to push sales to move remaining 2020 vehicle inventory. Automakers were also the top brand industry on TV by spend and impressions for both the entire month of November, and the specific time period from Thanksgiving through Cyber Monday.

The overall spend uptick for auto brands came with an increase for 13 of the top 20 brands as well compared to last November. Audi showed the biggest jump there at 100% year over year. Nissan (71%), Chevrolet (67%), Mazda (48%) and Land Rover (42%) also showed major spend increases.

“With attention back on the NFL and college football post-election, November ad spend data shows these brands getting back to normal -- even surpassing totals from last year at this time,” Schwartzapfel says. “Add in holiday sales creative pushes that typically hit TV too, and you’re seeing a very strong finish for auto brands in 2020, despite (understandable) mid-year questions.”