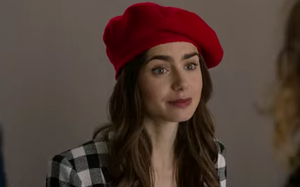 Since the series “Emily in Paris” launched on Netflix in early October (with a recently announced second season to come), it has been garnering lots of buzz, much of it negative.

Think: Pushy, clueless Ugly American heroine (played by Lily Collins) gets a dream job in Paris without knowing how to speak French, and effortlessly attracts most every man she meets.

Some folks are hate-watching “Emily,” while others call it a guilty pleasure.

But if you’re in marketing/advertising, you don’t have to feel guilty for bingeing “Emily.”  Because the focus — besides Paris and romance — is on Emily’s job at a marketing firm, it can even be seen as semi-enjoyable homework.

There are interesting business perspectives to ponder, some of them worst-case scenarios to which you can feel superior —and who doesn’t love that as an occasional ego boost?

For example, what idiot starts a new job in a marketing company by immediately lecturing her boss and co-workers on marketing and social media, using the most basic of terms? Or recommends, in a client meeting, doing a photo shoot at the Louvre without checking out whether that’s actually allowed? (It’s not).

Also in the questionable-to-forehead-banging-it’s-so-stupid realm: Emily’s banal captions on her Instagram posts, which somehow help her grow from 48 to 10,000 followers: “#EverythingsComingUpRoses!”(picture of a bouquet, natch) and “Paris is for cheese lovers.”

However, one caption is more sophisticated and in service of a brand she’s repping, a vaginal moisturizer. She writes, “The vagina is not male,” referring to the fact that the French word for vagina takes a male pronoun. That earns a retweet from none other than Brigitte Macron, wife of the French president.

Another idea worth considering is Emily’s pitch to a haughty French fashion designer, when she notes that aspirational buyers can sometimes be the backbone of a luxury brand.

Two other thoughts you may agree with: “It’s a perfume commercial. It doesn’t have to make sense!” and “Influencers don’t care about your brand. They’re driven by self-promotion and swag bags.”

Getting back to Emily’s weaknesses — she is undoubtedly what Lou Grant (of “The Mary Tyler Moore Show”) meant when he famously said “I hate spunk!”

Emily bulldozes her way into situations with little thought, as when she tries to get back a client who fired her agency without either telling her boss or learning the backstory of the firing.

Her clueless spunk is one reason why Emily is not lovable, unlike Mary Richards.

Though Emily does wear a hat — a beret (which critics have noted is a ridiculously stereotyped thing to wear) — she probably won’t be tossing it into the air like the beloved, iconic Mary some 50 years hence.