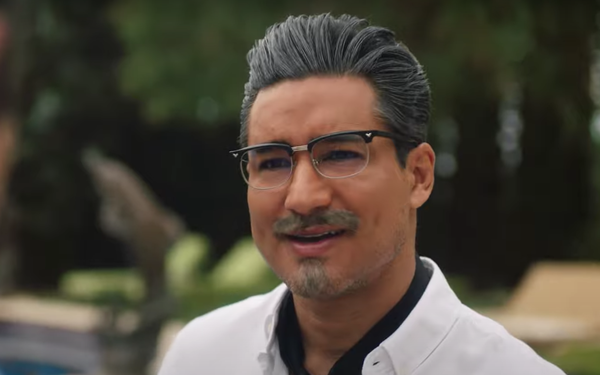 KFC is teaming up with Lifetime for a 15-minute mini-movie, proving that a chicken brand can be sexy and schmaltzy at the same time.

Called "A Recipe for Seduction," it features Mario ("FelizNaviDAD")  Lopez as Colonel Harland Sanders, who sweeps the young heiress off her feet. Scheduled to air on December 13, the Louisville, Kentucky-based fast-food chain says it hopes the tale of deception and fowl play will spark a few laughs.

After its premiere, viewers will be able to find the film on mylifetime.com/christmas-movies, all Lifetime apps and video-on-demand platforms.

Quirky content has been part of KFC's playbook for some time, whether it's creating branded Crocs, its KFC Dating Simulator or its 11-herbs-and-spices Firelog.

"We always want our brand to show up in interesting and unexpected ways in popular culture," a spokesperson tells QSR Land via email. "If they get a laugh in as they take a few-minute break from the heaviness of 2020, then we've achieved what we hoped. Of course, our goal is to sell fried chicken, but we also look at building brand awareness and affinity over time."

It's also linking the promotion to a deal, partnering with Uber Eats to offer six free tenders with any purchase of more than $20.

KFC acknowledges, though, that seasonal promotions are landing a little differently this year. "Consumer behavior has been changed forever by the pandemic," the spokesperson says. "This holiday season, we are aiming to spread warmth and joy through fun and entertaining content while also providing comforting meals that our fans can gather around the dinner table and enjoy."

"A Recipe" seems to be getting some buzz. Social analytics firm Talkwalker says the movie is trending, with more than 4,000  mentions and 16,000 engagements hours after the announcement.

Much of Twitter's reaction, besides plenty of finger-lickin' jokes about breasts and thighs, is predictable disbelief: "Next up on WTF 2020, Mario Lopez as Colonel Sanders," commented one person. "This wouldn't even be the Top 5 Weirdest Things that Lifetime has released," said another.