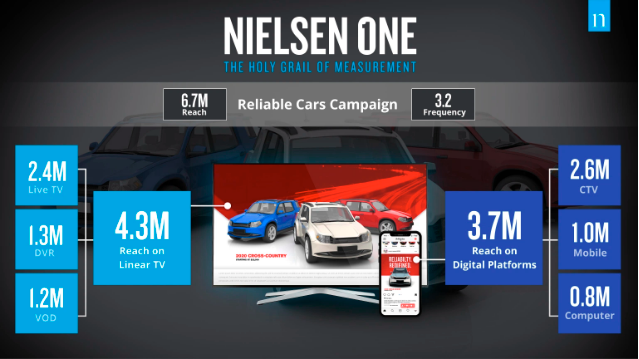 Nielsen, which is poised to spin off its consumer research unit into a separate company, this morning announced a plan to integrate its media measurement services into a “single, cross-media solution," also known as "the Holy Grail of measurement."

The solution, dubbed “Nielsen One,” is ironic given how many times the researcher has split up, reconsolidated and ultimately spun off its research assets again over the course of its history.

Nielsen said “One” is aimed at the “more than $100 billion video advertising ecosystem” and that it will utilize a “phased approach” that would begin with a rudimentary version launching in two years “with the intention to fully transition the industry to cross-media metrics” in four years.

Nielsen said it has already begun “unifying its technology” around the “‘One’ to modernize its panels, platforms and products” based on its new “ID resolution” system, and ultimately leading to the delivery of audience estimates at the “exact commercial minute” level.