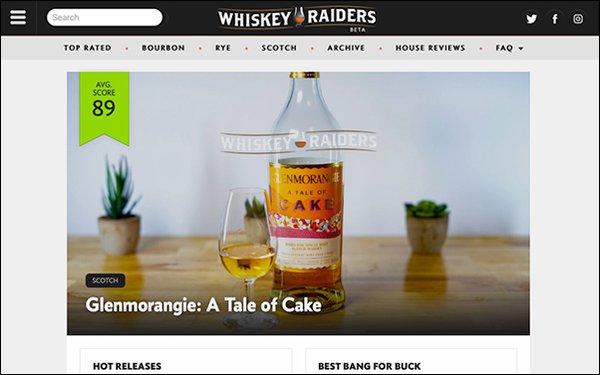 Whiskey Raiders, from Abrams Media, aggregates reviews from top whiskey sites and uses a proprietary algorithm to assign an average score for each whiskey.

The company is comparing Whiskey Raiders to the way the Rotten Tomatoes site works, which compiles reviews of movies.

Abrams Media was founded by journalist Dan Abrams in 2009; he is the Chief Legal Correspondent for ABC News and host of "The Dan Abrams Show" on Sirius XM. Its properties include Mediaite.com, Law&Crime Network, LawandCrime.com and TheMarySue.com.

t8ke.review will merge into Whiskey Raiders. West will serve as managing editor of Whiskey Review and add his personal whiskey reviews to the site.

West will also participate in a weekly video interview series about whiskeys for viewers’ different taste and price points.

The first episode will feature Abrams.

“Currently, you need to go to four or five different whiskey blogs to get a comprehensive sense of the quality of a whiskey,” Abrams stated. “Whiskey Raiders will now serve as a great starting point for anyone looking to assess the quality of a particular brand, while also encouraging and directing users to the full reviews for more in depth analysis.”

The site expects to announce an ecommerce partner in the coming weeks, so that users can purchase whiskeys directly on the Whiskey Raiders site.

The Law&Crime Network will now be available in 23 million households. It streams on most major OTT services, including fuboTV, Sling, Philo, Vidgo, Xfinity, XUMO, as well as basic cable packages.

The network is resuming its daily slate of live trial coverage and continues to invest in new programming acquisitions, according to the company.