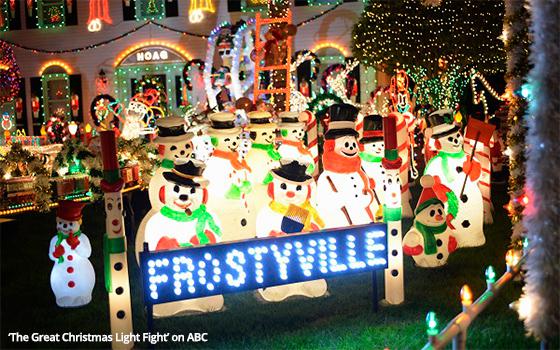 'Tis the season for one-sided stories on TV about Christmas-crazy neighbors from hell.

They are the hugely inconsiderate and self-centered people who think nothing of covering every inch of their properties -- houses, lawns, side yards, backyards and out-buildings (if any) -- with garish Christmas lights at this time of year that cast their immediate surroundings in brightness rivaling a night game in a football stadium.

They draw crowds like a football game too -- hundreds of nightly onlookers and roving cars that disrupt otherwise peaceful suburban streets, disturb their neighbors and necessitate the mobilization of local authorities for crowd control and traffic management.

And yet year after year, local TV news shows -- and various national entertainments shows such as the annual “Great Christmas Light Fight” on ABC (pictured above) -- celebrate these deranged displays with no input from undoubtedly angry neighbors who have to put up with them long after the crowds finally disperse late into the evening.

The impetus for this blog is the premiere Wednesday night of Season Eight of “The Great Christmas Light Fight,” a seasonal show lasting about three weeks that pits homeowners around the country against each other for $50,000 in prize money.

The money is rewarded to the household with the “best” Christmas display. Unfortunately, however, for those who live near the contestants, the so-called “best” displays are ones that cover so much area and put out so much light that they can be seen from Saturn.

Let the record show that these displays often require a very high degree of imagination, creativity, energy, commitment and money.

On the ABC Christmas show and the local TV newscasts that every holiday season heap praise on local people who overdo the decorations in this way, these Christmas crazies are always given ample opportunity to talk about how their gaudy, tasteless, thoughtless displays reflect how much they love Christmas.

They love it so much, they all say, that they want to “give back” to their communities by installing these gargantuan seasonal amusement parks on their properties every year.

But rarely (if ever) are their put-upon neighbors ever asked for their opinion about their obnoxious neighbors. One story seen recently on local TV news in New York was a case in point.

In this one, an apparently lonely man living in Staten Island was seen putting the finishing touches on his own annual display, which covered every inch of his small house and cramped yard space.

It was even evident from some of the b-roll seen in this package that the available storage space in his yard and house were so limited that the thousands of objects in this display were stored during the off-season more or less where they would be standing when the annual display was switched on every year in late fall.

This implied that this man's house and yard were stuffed year-round with Christmas décor representing an eyesore and possibly a health and sanitation nuisance to the rest of the neighborhood.

Or to put it another way, on any other show, this man would have been labeled a hoarder and his house threatened with condemnation.

But for reasons that are difficult to understand, today's TV reporters seem to lack any instinct to ask questions or otherwise react skeptically when reporting these stories.

To those of us who do not go in for these kinds of projects -- and never would -- the waste of time, energy and money is incomprehensible.

While previewing the season premiere of “The Great Christmas Light Fight,” I thought of my parents' admonishment to my brothers and me so long ago that we were leaving too many lights on and were therefore “wasting” electricity. Is that not still a “thing”?

And what about peace on earth and silent nights? It is difficult to see how either of these can ever be achieved by anyone whose neighbors next door or down the street are intent on installing a mini holiday-themed Las Vegas every Christmas.