Greatness Of America On Display In HGTV's 'Home Town' 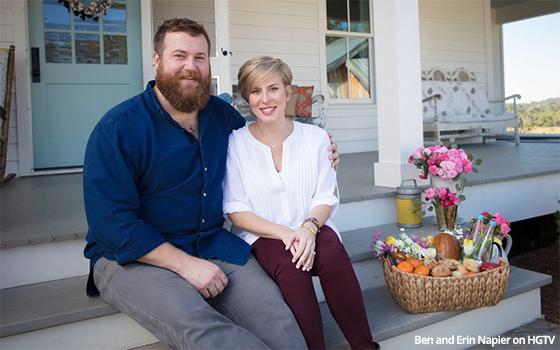 While watching an episode or two recently of HGTV’s “Home Town,” I was gripped by an epiphany: This show is the most hopeful show about America that is currently on TV.

“Home Town” is the one-hour show featuring a congenial and by all appearances very likable couple named Ben and Erin Napier (pictured above).

He is a carpenter and woodworker and she is an artist and interior designer. On their show, they are seen rehabbing old houses in their hometown of Laurel, Mississippi -- population 18,607.

Judging from some of the long shots of this town’s center, it has seen better days. Many of the downtown buildings and storefronts look empty.

Perhaps as a result of this economic condition, the town has a surplus of charming old houses, most in need of sprucing up but available for purchase at low, low prices. It is not unusual on this show for houses to sell in the five figures.

The Napiers do a great job breathing new life into these homes without sacrificing their character. In this way, the Napiers are also helping to revive their hometown.

Each episode of “Home Town” includes the story of each house, their former residents and the new occupants who will move in after the Napiers perform their renovation magic.

To coin a phrase, “Home Town” is where the heart is. The Napiers are no doubt profiting from their newfound stardom on national television -- as they deserve to be -- but on their show, money is not portrayed as the primary motivator in their efforts to rehabilitate their hometown one house at a time.

They evidently love their town and its people -- whether their clients are long-time residents or recent arrivals. On “Home Town,” the people moving into the homes rehabbed by the Napiers are diverse -- black, white, younger, older, gay, straight -- you name it.

Nobody bats an eyelash and nobody really cares. The town is what you might describe as organically or naturally neighborly. And this is why “Home Town” is so refreshing.

When watching a series of episodes on a rainy weekend afternoon, it came to me that this show provides a picture of America that is not often portrayed in our fractious television media which thrives on -- and often stokes the fire of -- conflict.

Call it America the Great or America the Resilient, but in this small town -- in Mississippi, no less -- tolerance and inclusion come as naturally to the people living there as breathing in the warm southern air.

I suspect that this is the case in many small and medium-sized towns and cities across America -- north, south, east and west. Why? Because this is what a great swath of America really is.

On that weekend afternoon a few weeks ago, “Home Town” served as a reminder that most of America does not involve itself in the strife that plays out nightly on the evening news. Most Americans are too busy living their own lives, and trying their best to be neighborly.