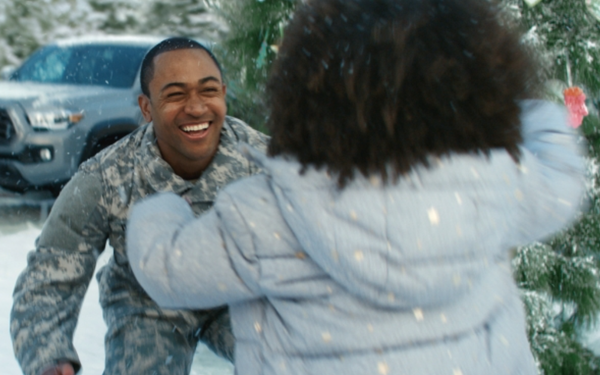 Toyota’s holiday campaign focuses on the “true meaning” of the holiday season, an opportunity to spread joy and create memories.

Created by Toyota AOR Saatchi & Saatchi, the 60-second spot “shares the heartwarming story of a young girl crafting homemade Christmas ornaments, and making multiple trips to a mailbox to send them off to a yet-to-be known recipient,” per the automaker.

In the last scene, the girl steps out of her mother’s Toyota Highlander and is shocked to see the ornaments displayed on a giant-sized Christmas tree close to the mailbox. Seconds later, her father, a military service member, steps out from behind the tree, and surprises her with his return home, just in time for the holidays.

“While the holidays may be celebrated differently for many people this year, we look forward to sharing a hopeful story that encapsulates the traditional spirit of the season,” says Laukes, who is retiring from the automaker effective Jan. 4 after 31 years of service.

Laukes’ successor is expected to be named any day. One contender is Lisa Materazzo, who has been vice president of Lexus marketing for two years, sources said. Neither Materazzo nor the automaker could be reached for comment at press time.

As for the holiday campaign, Toyota has partnered with USO (United Service Organizations), an organization that strengthens America’s military service members by keeping them connected to family, home and country, throughout their service.

Toyota is encouraging military supporters to send a message of encouragement to service members by visiting uso.org/message/Toyota.

Also from Saatchi, a second holiday spot titled “Super Mom” pays tribute to healthcare workers, featuring a working mother during the holidays juggling her time between family and her duties as a nurse.

At the end of the spot, her children leave a surprise in her Toyota Camry that shows their appreciation for all she does.

Adding to Toyota’s holiday line up, Conill Advertising delivered a cross-cultural message of togetherness with a fully CGI spot titled “The Journey,” produced in both English and Spanish. The spot shares a unifying message of family, with a RAV4 hero coming to the rescue.

“Mailbox” will begin airing  in 30- and 60-second versions on Dec. 10. The integrated campaign will appear nationally on broadcast, cable, digital, and paid social. The campaign also includes a Countdown to Christmas sponsorship with Hallmark Channel.

“The Journey” is airing on Hispanic broadcast and digital channels. The English version of the spot will start airing Dec. 10 during FOX Thursday Night Football, on NBC, as well as the Hallmark Channel during the week of Dec. 14.