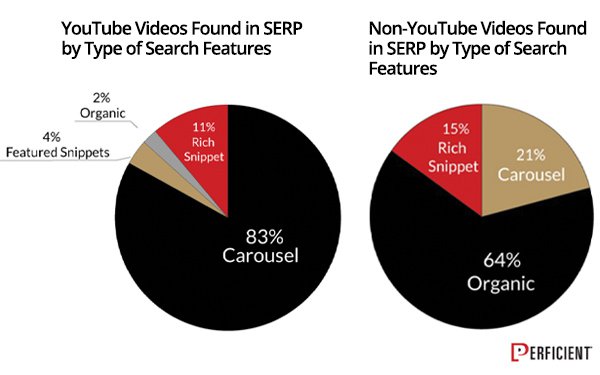 YouTube video continues to dominate the top listing in Google’s search engine results pages, with unexpected differences, according to a study released this week.

A study of YouTube video ranking in Google spearheaded by Eric Enge, principal at Perficient, shows just how often YouTube videos rank at the top in Google search results, and the major differences in the way Google's and YouTube's ranking algorithms work.

In fact, nearly 98% of all videos found in the No. 1 position via any type of search result come from YouTube.

“If video is a big part of your marketing campaigns, it pays off to host on YouTube as it maximizes your chances of getting search traffic from both Google and YouTube to your videos,’ Enge wrote in an email to Search & Performance Marketing Daily.

The goals were to evaluate YouTube's dominance in the Google SERPs and how video rankings vary between YouTube and Google. Analysts then evaluated the videos in each of the top 10 positions to determine the percentage from YouTube vs. other video sources.

In Google search engine results pages, 83% of YouTube videos appear in the video carousel, 11% in rich snippets, 4% in featured snippets, and 2% in organic.

It turns out that YouTube's dominance of high-ranking videos within Google does segment itself into specific areas, such as video carousels, featured snippets, and rich snippets. Other video sources perform much more strongly in the regular organic search results.

“It certainly could be the case,” Enge said. “Google has told me in the past that they have even actively consulted with other video platforms to help them do a better job at it. What’s interesting though is why it is that the other video platforms rank better in traditional organic search results and YouTube dominates the carousel, featured snippets and rich snippets.”

When asked if brands optimize the videos to appear in search take any special measures, or does YouTube automatically insert some sort of code to make the video appear more frequently at the top?

“YouTube does not insert some sort of code. But, marketers can do things to enhance their chances of ranking high in Google with their video,” Enge said. “That really comes down to properly addressing the basic YouTube optimization steps.

Enge also went into the difference between YouTube and Google ranking algorithms. Out of 6,145 queries, 92 of them returned one YouTube video in the top 100 Google results. The remaining 5,931 queries returned more than one video. The highest number of videos returned in one query was eight.

The top-ranking YouTube video in Google was also the top-ranking video in YouTube for the same query 28.8% of the time, which Enge says indicates a significant difference in the overall rankings for the two search engines.

The YouTube Video Optimization Checklist The report also details how to optimize individual videos. The work should begin before filming the video with raw keyword research to identify topics in high user demand. This means keywords that make sense for your business and where the existing YouTube videos have a reasonable number of views.

The white paper suggests beginning with keyword research, similar to the way a marketer might do so with Google search. Type related terms into the YouTube search box to see what autocomplete suggestions appear. Check the top videos that serve up for keywords.

If the current ranking videos have huge view numbers and come from top accounts with a large subscriber base, the topic might be too competitive for small businesses to chase on YouTube.

The basics of YouTube video optimization — file name, title, description, tags, and video category — also apply when optimizing for Google, according to Enge. What doesn’t apply is video engagement and the process for keyword research and topic selection.

Since Google is a broad-based platform, its use of video is limited compared to YouTube.

When selecting topics, it is important to spend time determining real opportunities. There are certain classes of queries that commonly have one or more videos on the first page of Google results, such as informational videos, tutorials, and How-tos.

The video presence in Google is not about direct conversion. The video will be viewed on YouTube.