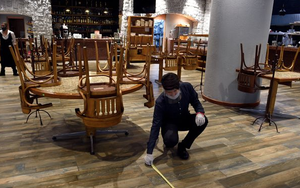 Winter could not come at a worse time for the restaurant industry, amid a resurgence of COVID-19 infections and uncertainty about financial assistance from within the Beltway.

Last week, the National Restaurant Association released the results of a late-November survey of 6,000 restaurant operators—encompassing both independent and franchised full-service and limited-service establishments—that paints a bleak picture for the industry.

Just 12% of all respondents reported higher sales in October versus a year ago—with 79% reporting reduced sales.

Limited-service restaurants—defined as QSRs, fast-casual and coffee/snack concepts—fared the best, with 19% registering higher sales. Within the category, franchised units were up 24% and independents 13%.

Among independent, full-service eateries, just 6% had higher sales in October, compared to 7% for those run by franchisees.

Looking ahead, the NRA survey concluded: “The vast majority of restaurant operators do not expect business conditions to improve in the coming months.

One reason for the poor financials is the end of the outdoor dining season in many parts of the country, according to the NRA.

In some states, things aren’t getting warmer indoors.

This week, New York Gov. Andrew Cuomo and New York City Mayor Bill de Blasio said it’s possible in the coming days that New York City restaurant owners will have to cut indoor dining from 25% of capacity to none.

According to data from the Washington, D.C. health department, there were 109 COVID-19 outbreaks in the District of Columbia between Aug. 1 and Nov. 26. Of those, 27.5% were traced to colleges/universities, compared to 17.4% for K-12 school buildings. Childcare/daycare settings and restaurants were tied at 13.8% each.

Older generations are still the most likely to die from COVID-19, per the U.S. Centers for Disease Control and Prevention.

This helps to explain consumer attitudes toward indoor restaurant dining.

“A theme also emerged amongst those who aren't currently dining out that they are eager to go back to restaurants in a safer, post-vaccine world,” Feedback Loop vice president of research Roddy Knowles tells Marketing Daily. “There is a light at the end of the tunnel for restaurants, but the length of the tunnel—and how tortuous its path is—remains to be seen.”

“In short, the restaurant industry simply cannot wait for relief any longer,” the NRA wrote.

“Efforts in Washington to find the ‘perfect’ solution are laudable, but the lack of progress in the meantime has led too many operators to give up on the government and close down for good. Since our last update to you, less than three months ago, an additional 10,000 restaurants have closed nationwide.”