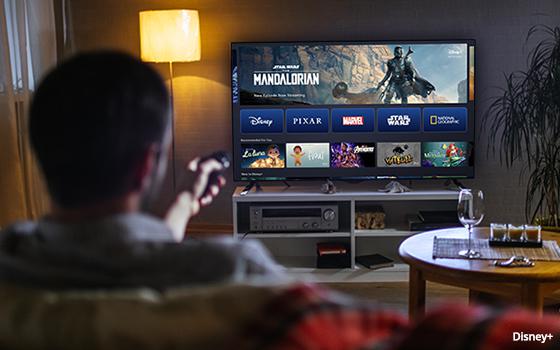 Disney made the announcement at its annual investor day event on Thursday.

Looking at its big streaming platforms -- Disney+, Hulu (its advertising video-on-demand service), and ESPN+ -- all three now total 137 million global subscribers. Hulu is now at 38.8 million, and ESPN+ is at 11.5 million.

A year ago, Disney started its first day of operation with 10 million subscribers -- largely attributable to the year-long promotion with Verizon, which offered 12 months of Disney+ free to its customers.

At the investor day event, Disney announced the monthly price for Disney+ and the Disney bundle of three streamers (Disney+, Hulu and ESPN+) is going up by one dollar -- to $7.99 and $13.99, respectively.

In addition, Disney is offering a new premium bundle of those three services for $18.99, where the Hulu option will come without ad interruptions in an effort intended to push Hulu's visibility against other premium subscription (no advertising) streamers -- like Netflix.

The company also announced that Disney and Comcast Corp. agreed to a carriage deal for Disney+ and ESPN+ on Comcast’s digital cable systems, Xfinity X1 and Flex platforms, starting in the first quarter of 2021.

The two platforms will give both Disney+ and ESPN+ another 20 million U.S. subscribers. Comcast already has an existing deal for Hulu.

In terms of content, Disney announced it will substantially bulk up the Disney+ service in future years with aggressive plans.

Following up on other film studios' efforts to launch big-screen movies in theaters at the same time as their streaming service, Disney will release “Raya and the Last Dragon” on the same day and date in March 2021.

Disney recently announced it is streaming Pixar’s “Soul” on Disney+ Dec. 25, a film that was intended as a theatrical release.

Just a week ago, WarnerMedia announced all its 17 theatrically exclusive films would be released throughout 2021 at the same time as on its HBO Max streaming service. Those movies on HBO Max would get a limited one-month run.

WarnerMedia says it is doing this, in part, due to the pandemic. But analysts predict this could be a new model for theatrical movies and would continue in some form in future years.