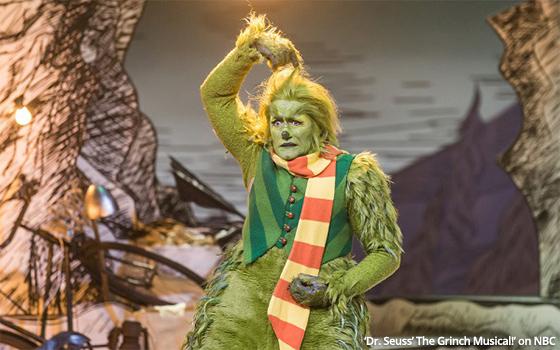 Maybe in this season of Christmas and COVID, people are looking for peace and quiet from their TV shows.

Then again, maybe not.

The ratings for last Wednesday night in network television reveal a state of holiday-themed TV that is difficult to pin down.

On the one hand, NBC expended a great deal of effort and (presumably) money to stage a two-hour “Grinch” musical and nobody came. And nobody cared.

On the other hand, the season premiere of ABC’s annual celebration of the nation’s tackiest Christmas decorations -- “The Great Christmas Light Fight” -- far outpaced the Grinch, and improved on its first-night audience from a year ago.

According to trade press reports, “Dr. Seuss’ Grinch The Musical!” (starring Matthew Morrison, pictured above) drew a total audience of just 2.6 million viewers, one of the lowest such audience tallies for a prime-time musical on NBC since “The Sound of Music Live!” ignited the current craze for network musicals in December 2013.

Why the lowly audience? Possibly it was because a musical such as this one works much better as part of a family outing to a big city to see it in person, and also to take in the holiday displays and store windows and have a festive dinner out -- such as millions used to do in New York before the pandemic, for example.

As a stand-alone attraction on weeknight TV, this musical version of Dr. Seuss’ famous story, “How The Grinch Stole Christmas!,” is not as special as a day on the town. Instead, it is just another TV show, no matter how much it screams for attention.

Conversely, on ABC that same night (December 9), “The Great Christmas Light Fight” had a reported total audience of 4.02 million viewers over its two hours. As noted in a TV Blog last week that was warmly received here, this show is anything but peaceful and serene. Instead, it is as manic in its own way as the Grinch musical.

Nevertheless, ostentatious Christmas light displays are apparently more relatable to audiences this holiday season than a story set to music about a green furry man’s diabolical plot to deprive the residents of Whoville of their Christmas presents.

At the same time, the audience tally for “Christmas Light Fight” was comparable to the total audience for two non-holiday dramas on CBS that same evening -- “SEAL Team” (4.47 million) and “SWAT” (3.88 million).

That audience number hovering from the high 3 millions to middle 4 millions, seems to be a benchmark or “sweet spot” today for identifying “successful” TV shows.

For example, in published reports about the ratings for network shows cited above, the top shows in basic cable last Wednesday evening had audience tallies in that same ballpark. They were two news-talk shows on Fox News Channel -- “Tucker Carlson Tonight” (3.98 million) and “Hannity” (3.77 million) -- followed by “Rachel Maddow” on MSNBC (3.7 million).

As far as can be determined from the available evidence, none of those three news-talk shows that night had anything to do with Christmas or any other holiday such as Hanukkah, for example, which started the next evening, on Thursday.

Instead, the three shows covered the same old ground they always cover -- namely, the political divisions in this country that seem never to take a respite, even during the holidays.