After 'Big Bang,' A New Constellation Of TV Stars 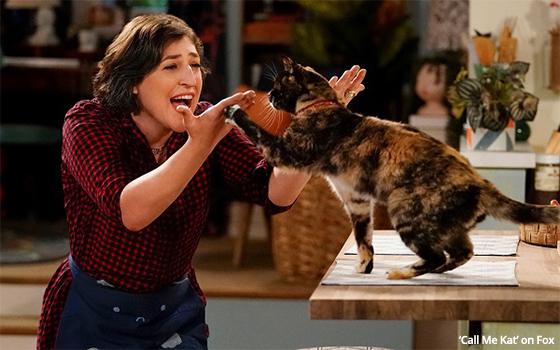 The first network sitcom of the new year represents the second show to appear this season with a former star of “The Big Bang Theory” as the series’ headliner.

This one -- titled “Call Me Kat” and scheduled to premiere on Sunday, January 3 on Fox -- stars Mayim Bialik in the title role of “Kat,” a 39-year-old single woman who owns a cat café in Louisville, Kentucky.

The show will arrive just a few weeks after Kaley Cuoco’s new drama “The Flight Attendant” started streaming on HBO Max. That show has already been renewed for a second season.

“The Big Bang Theory” was probably the most successful TV sitcom of the last 15 years (it premiered in 2007). It stands to reason that every single one of the series’ regulars are now seen as bankable stars all worthy of their own shows.

Mayim Bialik, who last headlined her own show starting at the age of 15 -- NBC’s “Blossom” -- would seem to be one of the worthiest. Trivia alert: Her new show, “Call Me Kat,” will premiere 30 years to the day after “Blossom” premiered on January 3, 1991.

For people who are particular fans of Bialik, “Call Me Kat” will be more than satisfying. For everyone else, that will depend on how much Mayim Bialik one can take because in this show, you get a lot of Mayim.

Naturally, since she is the show’s central character, she is in every scene. But more than that, the character is not only seen but heard -- constantly and all the time.

This is achieved by a particular choice on the part of this show’s production team to have the character break the fourth wall to address her audience -- which the Kat character does at every turn.

The result is that Bialik has quite a lot to do in her role as series’ headliner. Not only does she have to memorize the ample pages of dialogue she has with supporting characters who come and go, but she must also supply this running side commentary on every nuance of those encounters and every other behavior she engages in.

To shoulder all of this responsibility, she appears at times to oversell the character’s constant commentary on her inner life. This is what I mean when I say you get a lot of Mayim Bialik in this show.

In the course of watching her put this concept across, viewers will either grow tired of her, or she will grow on them. The TV Blog is rooting for the latter.

Bialik, a sitcom veteran in her own right, gets very capable support in her new show from fellow TV stalwarts Leslie Jordan, Swoosie Kurtz (as her mother) and Cheyenne Jackson.