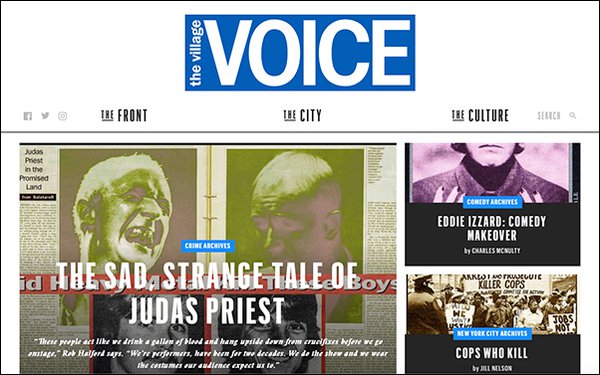 Street Media has acquired The Village Voice, which shuttered in September 2018. Since then, it has posted articles from its decades-long vault.

The parent company to LA Weekly and Irvine Weekly, Street Media did not disclose financial terms. But Brian Calle, CEO-publisher, called the Voice "one of the most iconic papers in our nation."

The company plans to resume online publication in January, while a print version will appear quarterly.

The Voice's former owner, Peter Barbey, has already created a digital archive of the iconic publication. The print archive will be donated to a New York public institution.

Barbey said it was “a symbol of New York and American political and cultural progress. Though we were not able to overcome the economic conditions facing the news media industry, we have since worked tirelessly to ensure The Village Voice inspires, informs and educates future generations.”

The Obie Awards, one of the Voice's assets, will not be part of the sale, but will continue its presentation via The American Theater Wing.

The Village Voice was founded in 1955 by Dan Wolf, Ed Fancher, John Wilcock and Norman Mailer. During its six decades of publication, it won three Pulitzer Prizes, the National Press Foundation Award and the George Polk Award.