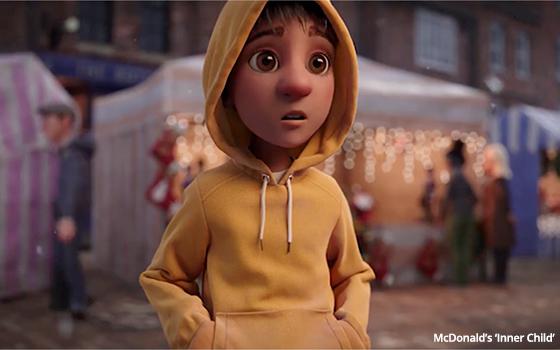 This year, tech shop Realeyes tested 43 videos to uncover which ones were the most effective in retaining attention. As its report states, “Creativity is one thing in ads, sustaining attention is the real key to effectiveness and intent to purchase.”

McDonald’s, TK Maxx (TJ Maxx in the U.S.) and Lidl, scored the highest of all the ads analyzed based on their abilities to capture attention in the first seconds, retain them throughout the ad, and “encode” the brand message into the brain through emotional engagement.

McDonald’s spot, developed with Leo Burnett, follows a boy with no Christmas spirit, but re-discovers it and his inner spirit after visiting the fast food chain with his father.

Lidl and agency partner Karmarama developed a spot that showcases a CGI-created young girl who enjoys a holiday dinner with her family thanks to all of the items purchased at the store.

An ad from TK Maxx and Wieden + Kennedy London humorously shows an older couple gazing through their window at one of their goats, for whom the husband has purchased fashionable clothes at the retailer.

The Realeyes report also analyzed a few spots that missed the mark this year, including a Just Eat advertisement, developed with McCann London that starts off by capturing viewer’s attention by featuring the distinctive voice of Snoop Doggy Dog. A gold-chain-wearing “D.O.G.G” puppet raps about jerk chicken nestling in his stocking and "burritos dropping down the chimney." However, despite the surge of early attention, the spot was found to lack the ability to form any long-lasting connection with viewers.

Similarly, Pepsi Max’s “Christmas Refreshed,” created by Truant London, swapped Christmas trees for palm trees and “tat for taste.” The ad hooked viewers from the get-go, but doesn't manage to retain this initial level of attention as the video unfolds. The ad features UK grime and rap artists Kamakaze and TrueMendous to encourage people to try something new, declaring that “Traditional is so cliché.” The fast edits may have been challenging for some audiences, suggests the research.