Media Supplier of the Year: The Mainstream Media (a.k.a. "Fake News") 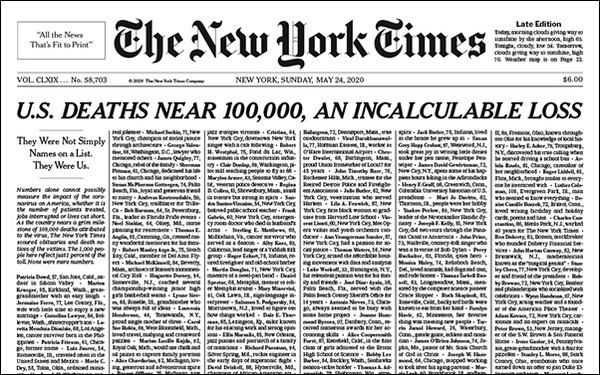 After four years of being incessantly marginalized as “fake news” from the highest office possible, America’s mainstream news media rose to the occasion in what would have been a difficult year for publishers and newscasters by any standard. They had to contend with not one, but a “perfect storm” of events that challenged the very newsrooms needed to cover them, including:

Despite the economic, social and logistical adversity, some of America’s best news organizations dug deep to keep the world a clean, well-lighted place, not just for consumers, but of the advertising brands that depend on consumer trust amid what may well be the worst info war the world has ever seen. While the political one alone would have been enough to foment cynicism and disbelief, the tributaries of disinformation appeared to have infected every facet of society, including infections, spawning what was dubbed as an “infodemic” of mistruths and false facts about the COVID-19 pandemic, its spread and treatment.

It would have been easy to single out plenty of individual organizations as MediaPost’s supplier of the year — newspapers like The New York Times and The Washington Post for investigative journalism rivaling their Watergate era benchmarks, magazines like The Atlantic and The New Yorker for digging even deeper, or network news organizations for keeping the light on, but in the end we felt it was the overall class of 2020 mainstream news outlets that worked as a whole, albeit competitively, to counterbalance a year of epic misinformation. 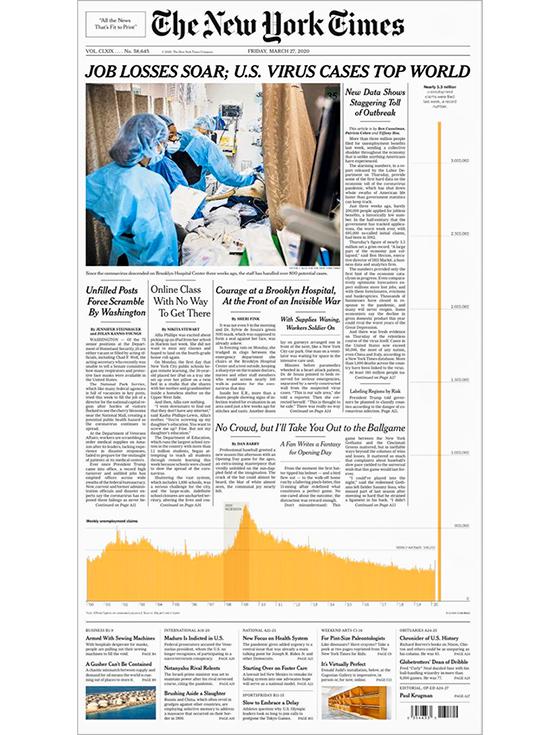 “The thing about disinformation is that the bad actors often work together. They’re happy to spread each other’s misinformation. The counter to that — the free and plural press — have always competed with each other,” observes Jason Kint, CEO of Digital Content Next, the trade association representing many of the top mainstream media organizations.

While a number of research studies have shown that disinformation spreads faster than fact-based reporting, Kint says many of the best journalism organizations compete with one-hand tied behind their backs, because instead of promoting each other’s most important stories, they tend to compete aggressively.

While it could be argued that also spawned a competitive spirit of one-ups-manship with leading news organizations devoting the resources to trump each other with investigative reporting that advanced the broader stories, those very same news organizations were more challenged than ever because of the combination of economic, public safety and intense social and political pressures that they had to confront while doing it.

“I think it’s fair to say that these news publishers have been covering probably three of the biggest stories of our generation — all intersecting at the same time — between the election, the Covid pandemic, and the racial injustice/Black Lives Matter movement. And that their ability to stay true to their brands and to the public trust despite both personal and professional obstacles has been remarkable,” Kint says, adding that these very same news events were challenging their news organizations’ ability to do their jobs.

“Covering the pandemic hit them both socially and economically when they had to be out in the field creating a health risk for their staffs while covering it, while the equity/Black Lives Matter movement forced them to look inward at their own organizations and their ability to truly represent the public that they are supposed to be informing,” he cites, adding that worst of all they had to accomplish these tasks while undergoing their own economic hardships from the pandemic, as advertising and subscription revenue models were severely strained.

“And all this was going on while they were trying to cover an election in which they were being attacked and discredited every day, yet struggling to maintain their integrity and their promise to the public to inform them, despite — arguably the largest platform in the world, the President’s Twitter account — trying to undermine them in a really horrific way,” Kint asserts.

While that last challenge isn’t new, and is something the mainstream media have been struggling to address for four years, it came to more of a head in 2020 as America split into what Ipsos’ political polling experts described as “two alternate realities.”

“This is really important to understand,” Ipsos top political researcher Chris Jackson said during his last briefing prior to the election, adding, “we’re not even necessarily talking about the same reality. In a lot of ways, some of us are talking about Mars and others are talking about Venus.”

Importantly, Jackson cited research showing that regardless of their political affiliation, the alternate realities of Americans were being shaped by the news organizations they got their information from.

The studies, which asked voters of all parties whether they agreed or disagreed with two facts — the official U.S. COVID-19 death toll and whether they approve of the President’s handling of it — found alternate views of those realities even within the same party, depending on whether they relied on Fox as their source for news. 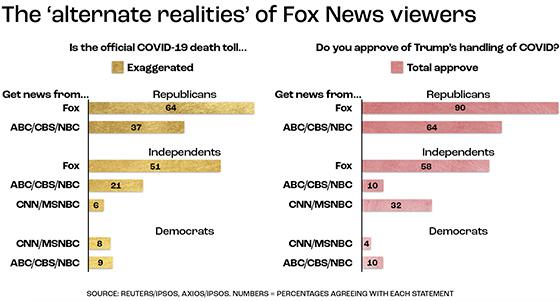 “We see a huge difference between Fox News Republicans and non-Fox News Republicans,” Jackson said while presenting the data shown in the chart above. He also noted the same thing was true among Independent voters, depending on whether they got their news from Fox or not.

“There’s a strong divergence about what we understand to be ground truths and ground facts,” Jackson bemoaned.

Worst of all, it has proven to be a successful business strategy, driving Fox News’ ratings and revenues. According to a Pew Research Center analysis, Fox News’ ad revenues actually surged 41% during the pandemic.

In fact, according to Fox Corp. CFO Steve Tomsic, Fox News generated a record $400 million in political advertising revenues between January and November 2020, proving that alternate realities are not just divisive, but are incredibly profitable too.

Despite the lopsided economic models of fact-based reporting during 2020, DCN’s Kint says the mainstream media had no choice but to take a hit on their margins because they were directly or indirectly reinvesting in the credibility of their journalism brands.

“They all have ROI and economic deliverables to their shareholders and their owners, but being news organizations they also have a high bar in terms of delivering on the consumer’s trust that they know their brands are beholden to,” he explains, adding that there were also some surprising unintended consequences that they had to grapple with, including a programmatic “brand safety” technology that was inadvertently handicapping mainstream news organizations for the wrong reasons.

During the year, DCN learned that many advertisers, DSPs and brand safety ad technology solutions were using certain keywords like “Covid” or “Black Lives Matters” to block ads on pages of content they were buying. The phenomenon was automated, and designed to prevent a marketer’s ads from showing up alongside controversial content, but when the DCN sent letters to advertisers explaining what was going on, they backed off using the keywords for blocking ads on news pages.

“The irony was that these newsrooms were shifting their resources toward covering the pandemic in which the advertising was being blocked because of a keyword blocking technology,” Kint recalls, adding, “That was flying in the face of the ROI and the economics. But they had to do it, because the public comes to their brand to be informed about what’s going on in society. That, in the long term, will prove to be the right decision. But in the short-term, it’s a tough decision. I don’t know who else in the media supply chain has to make that sort of decision.”