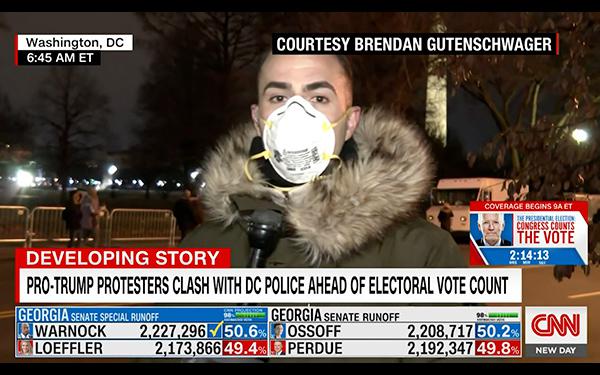 Major TV news networks cut back significantly on national advertising on Wednesday, the day of the siege on the U.S. Capitol -- with many airing no commercials for much of the afternoon and into prime time.

Much of the nonstop news coverage begin midday and went well into the evening for many networks. The siege of the Capitol began after a rally where President Trump spoke.

Due to nonstop airing of news coverage, MSNBC had no national commercial airings in prime time, according to iSpot.tv. The previous day it had 53.

For the entire day, MSNBC saw its commercial airings drop by half -- to 259 from 500 airings the day before. All occurred before news coverage of the events began in the afternoon.

Fox News Channel was at 245 total-day national commercial airings for Wednesday -- also none in prime time. The day before -- Tuesday -- it was at 536 for the entire day and 56 in prime time.

CNN had 339 total day advertising airings and zero prime-time airings on Wednesday. CNN was at 847 total day airings and 68 in prime time on Tuesday, the day before.