Wing And A Prayer: 'The Rev' Takes Its Place In Front Pew 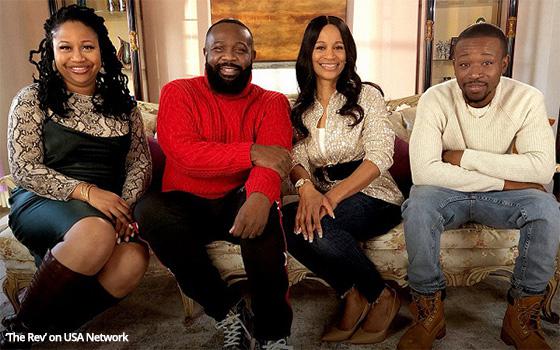 The introduction of a new reality series centered on an extroverted man and his family begs the age-old question: Why do some of these kinds of TV shows work and others do not?

To those of us who are not among the “Chrisley” faithful, the show remains a mystery. It is often on, when one is grazing through the cable channels.

From these encounters, it is easy to form the impression that the show consists of little more than these Chrisleys sitting around talking. They do this in their kitchen, on a couch, in the car and in other places.

As a matter of fact, this sort of action -- which is actually inaction -- is a hallmark of these family-type reality shows, whether the family is famous (such as the Kardashians and many other celebrity families whose shows were much less successful) or not (such as the Chrisleys, at least at the outset).

To those of us who do not understand or enjoy these kinds of reality shows, watching people sitting around talking -- and in the process, complaining about every little minute detail of their privileged lives -- is about as exciting as watching paint dry.

And now, into the reality-TV family fray comes the Rev. Richard Hartley along with his family -- wife Stacey, and grown children Judea and Jordan (all pictured above).

Their new show is called “The Rev,” and it premieres Thursday night on USA Network at 10:30 p.m. Eastern following “Chrisley Knows Best.”

In the half-hour premiere of “The Rev,” we become acquainted with Rev. Hartley, his family, various associates and the church the Rev runs.

Headquartered in Rockaway Beach, Queens, a block from the ocean in what is evidently a former synagogue, the Rev's church is called Haven Ministries.

As with many of these shows, the premiere episode of “The Rev” is essentially plotless. It consists chiefly of Rev. Hartley interacting with his family members.

These interactions involve the Rev making all sorts of pronouncements and declarations about their lives, and life in general, in a loud tone of voice that reminded me of Cedric the Entertainer, but is not nearly as funny.

This is a common characteristic of these kinds of reality TV shows in which very little happens: The characters in the show (or in this case, one of them) take their behaviors to extremes in order to “sell” the idea that their lives are interesting.

Often, they oversell themselves. And this seems to be the situation with “The Rev” and its overpowering leading man, Rev. Hartley.

He comes on very strong in the series premiere as he thoughtlessly insinuates himself into the lives of his grown children, and intimidates (or some might say bullies) others such as the church choir who walk out on him when he pushes them too hard.

As the titular star of this reality series, the Rev unfortunately can be difficult to take. No doubt he possesses considerable charisma, but in this week's premiere, it remains hidden beneath a lot of self-centered bluster.

At the episode's conclusion, however, the Rev is seen apologizing to his choir members, while at the same time they promise him that they will work harder and take his direction.

This show of unity produces the best scene in the show as the Rev and his choir join together to make beautiful music. Amen to that.